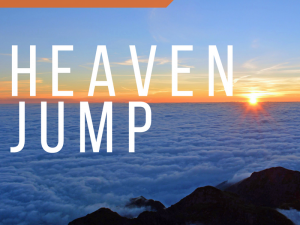 Acts 2 is often classed as the birth of the church and seems to be everywhere at the moment.  So when given the opportunity to preach on Acts 1, I was excited to get my teeth into the start of the story. Luke's second book starts with Jesus and his ascension into heaven. I spent Ascension in Palermo (more on that here and in future blogs) and one of the conversations we had was what we called the day. My favourite was the Norwegian translation; rather than a basic 'going up' as it is in English, Louise proudly told us it would translate as 'heaven jump'. The image stuck with me of that leap from Earth to Heaven.

The passage goes on to explain what had happened, with "men in bright clothes" once again turning up to explain what was going on to the very confused disciples. We've seen this before in Luke 24,

The disciples have been told to stay in Jerusalem and they do just that while getting themselves back up to a quorate 12. I wonder if they really needed to have a twelfth apostle. There is something about the number 12 in the Bible (12 tribes of Israel from the 12 sons of Jacob) maybe it means that all are included, or maybe they just though Jesus chose 12, we should have 12. However, the person they picked was one of two who had been with them the whole time. Out of the 120 people there at the time many had journeyed with them previously.

It made me ponder:

I don't generally make decisions by drawing lots like they did in this story, that isn't how I choose friends. I do though decide minor things by playing rock paper scissors, not for the difficult and important decisions, just the ones like whose turn it is to get the ice creams. I find flipping a coin can also help, not that I do what it says but that I work out what I want the result to be.

The other thing the disciples are doing is waiting. The disciples had no idea what was next and maybe you are in that position too. What are you waiting for?

So here are the disciples - with Jesus 'jumped into heaven' they are working out who their friends are and waiting to see what is next. I wonder where you are in this story?