Rach's Reflections - If I weren't a Christian 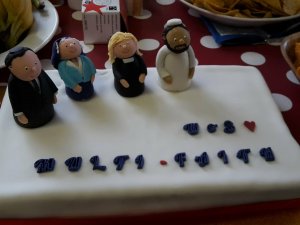 As you may know, it was interfaith week last week. I have had the opportunity to attend two different events. First, on Wednesday the group who normally meet for Coracle went to Manchester Met Student’s Union for a “Speed Faithing” event.

It was great to meet with people of other faiths as well as other stances within the Christian faith. We had discussions on scripture and worship, commitment and prayer. It was interesting to see the similarities, as well as differences and the keyword that came up in the Christians' conversations was that of Grace, which we had to explain to the Muslims.

When I got back to St Peter’s House one of the chaplains jokingly asked me if I’d stopped being a Christian. I pondered what would have happened had I not been born into a Christian family. Would I be a devout Muslim, praying five times a day and being part of a mosque community like I am my local church?

On Thursday I was at the community opening of the new Faith Centre at the University of Salford. This is a place where the faiths work together, sometimes with rooms designated for special activities and others in spaces they can share. The interfaith room, for example, has Muslim Prayer for Women on a Friday, and Catholic Mass on a Sunday. Each activity has its own storeroom just off the main room. The team of four chaplains are very much one team covering Christianity, Islam and Judaism and it was great to meet many people involved in local faith communities as well as those passionate about interfaith – including one man who worked for SCM in Hull in the past.

The week has made me wonder what I look for in my faith community. The core foundation of Christianity in Jesus, of grace and love, is important. As is, for me, a passion for social justice and a chance to question and wonder. I thoroughly enjoyed A Light for All where both those sides came out in our day about the Bible. And when you put it like that, SCM feels like a great place to be.