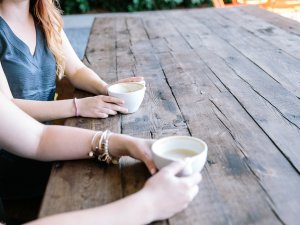 On Wednesday, I was going to have tea with a university friend in Huddersfield. We regularly meet up, go to a certain brand of pizza restaurant and order the exact same thing every time. It is all very intentional. That day there were train delays, so I ended up waiting for a train I wouldn’t have got otherwise in order to get a train from another Manchester station to get there faster, or at least less delayed. On this chance train I was spotted by a friend who happened to be in Manchester for two days training, and was now on his way home to Nottingham. This meant we got a whole five minutes of conversation just by chance. Later, we went off in our different directions to get the next train of the day and ended up being able to wave through the windows to each other as where we had chosen to stand on our respective trains lined up. All by chance.

I’ve been pondering these chance and intentional encounters all week.

Encounter is one of the words that the team at St Peter’s House, where I am based, are trying to embody. During Welcome Week, in every chance encounter with students, staff and others I’ve had, I've tried to be intentional. Even if those encounters have just been about sharing useful information and giving directions, I've intentionally cared for those I’ve met.

I’m speaking soon at the Association of Inter-Church Families conference on the topic of passing on faith to the next generation, and one thing I will be saying is that we need to make sure that we do it intentionally. Sometimes we have those faith sharing opportunities by chance, but even then we can shape a conversation intentionally. I find that explaining split-ticketing to my fellow commuters when they see me hand over a stack of tickets to the conductor can easily open the conversation up to share that I work for a charity, enabling me to share what and who SCM is, and that what I do with students across the North West is the outworking of my faith.

I wonder how you are intentional in sharing your faith? And how do you share it by chance just by being you and living out your faith?