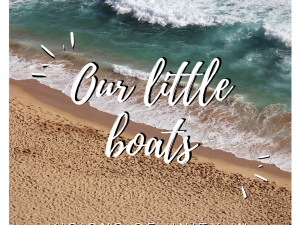 Have you ever felt like you are just a small boat in a huge ocean? Like whatever you do isn’t going to make much of a difference? I often feel like that. The North West is so vast and I am only one person.

Last Friday, Simon (SCM’s National Coordinator) and I joined Student Workers and Church Leaders from across Greater Manchester and beyond at the University Ministry Forum. During the day each church or student organisation had ten minutes to share some of their passion for students and plans for student work in the area. It was great to have representatives from other student organisations like Friend’s International, Fusion, Just Love, and UCCF. I, of course, shared stories and ideas of the North West Hub, including my upcoming events like the Student Work Meet-Up, Day of Prayer for Students and Greater Manchester Loves the Earth.

It was great to hear Adam Jones, North West Team Leader of UCCF, speak about unity in his keynote talk. He said that what unites us in our diversity is magnificent and precious, and what challenges our unity affects our evangelism. He posed questions to us asking how we could build each other up by speaking positively of one another and working together when possible.

The image that struck me most that day was from one of the introductory talks by Jo Blair, one of Fusion’s Student Mission Developers. She talked about Luke 5 where Jesus calls the disciples, and they put their nets down and collect so many fish that they have to call over other boats to help. There are plenty of fish for all, and each boat is doing their own job for the one mission. We may work in different ways and have different models and practices, but at the end of the day, we are all boats working alongside each other on the sea that is student ministry.

In the rest of the day the image came up again and again – others linking it to the recent Dunkirk film, or talking of choirs singing in harmony and quoting Revelation 7:9:

"After this I looked, and there before me was a great multitude that no one could count, from every nation, tribe, people and language, standing before the throne and before the Lamb. They were wearing white robes and were holding palm branches in their hands.”

We were encouraged not to see it as a competition, but to recognise that all of the boats are needed for the work of God. I’m so grateful that my little North West Hub boat is not alone, and to also know that it is needed. As are you.