Reaching out to Students: An Interview with Sally Hitchiner 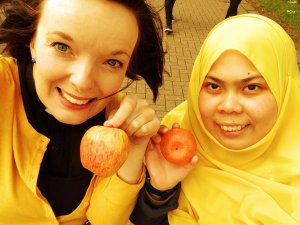 As Coordinating Chaplain at Brunel, what do you love most about your job?

It has to be the students. Being an undergraduate is such a formative time. It’s when people work out what values and influences they want to have an impact on the rest of their lives. Leaving home for the first time and leaving behind the expectations and constraints of living with parents and the friends you've grown up with and having all the freedom that comes with that, combined with the intensity of living in halls of residence and sharing life so closely with a group of other students who you haven't chosen and may or may not share your perspectives on life... it has potential to be a time like no other. The opportunity to offer support and community to people in this situation and to see them develop through it is incredibly exhilarating. I guess there must be other fulfilling jobs out there, but right now I can't think of how there could be.

How do you reach out to students?

We have three different levels on which you can engage with the chaplaincy. We have low challenge and highly publicised events and groups that communicate our most basic messages, which are of our community and that students are valuable whatever grades they achieve or how cool they are. Our most popular of these is Rabbit Café - every Friday afternoon we have little rabbits come into the chaplaincy café area and students pop in to play with them. We get about 150 students each week to this. We also run other community-building groups like a Lego club and ‘Crafternoons’, where students get together to learn crafts. We have events for people who are interested in taking things further, either in our Pub Philosophy Club, our charity work or our faith awareness courses. If people want to explore a particular faith we have a range of chaplains and faith societies who put on events and run courses to help.

I often find that students want to explore Christianity but aren't sure which denomination or group to join. So I run a group where we simply read a chapter of Luke's gospel each week and talk about what we think it might say to our lives. It's like a book club. We have all sorts of things running through the year, though; there's something for everyone!

Do you have any advice for those starting university this autumn?

Bring homemade cake - it’ll help you make friends like nothing else! Get to know what groups are out there in the University, and join one that you want to give a lot of time to and one that you want to give a small amount of time to. If you're religious, don't just join faith groups - maybe try a sports club or a drama society, something that'll get you being physical. Faith societies like SCM are brilliant to get plugged in to. I’d also say to prioritise finding a church that you want to settle into. Try a few, but settle into one by Christmas. Once you've chosen your people, it will help you stay grounded and not be thrown around by all the things that affect people in their first year away from home. If you're LGBT, I suggest joining a group like Diverse Church (which has a secret Facebook group, so you don't have to be out to join) so you're able to have somewhere to process that part of your adult life too.

Could you tell us more about Diverse Church and how it came about?

When I came to terms with my own orientation I realised that the group who felt most excluded from God was the LGBT community. I opened up the chaplaincy I run to the LGBT Society for their welfare ‘LGBTea and Cake’ meetings. When they had Christian friends who came out to them, they sent them to talk to me. They were often from conservative churches and their stories were often heart-breaking and of deep isolation and misunderstanding. I realised what they really needed was to meet each other. I looked around for a group for them but couldn't find anything, so I set up a secret Facebook group and it went from there. We had an official launch (or Coming Out) just over a year ago on Twitter and since then it's exploded. We have about 250 members now and we specialise in helping them to tell their stories. Every Friday we hand over our twitter account to a Diverse Church member who isn't out so that they can tell their story to the world. Do check them out @Diverse_Church. They're gripping reading.

What do you think Jesus’ key message was, and how should we respond to it?

I think Jesus' key message was one that God loves the world and offers relationship with himself to anyone who would want it. Finding that relationship in the message of Christ has been more liberating and life-giving than I could imagine. The stories of Jesus in the New Testament Gospels are where I would start in responding - actually, I think that has to be where we keep coming back to as well; everything else is just footnotes. Benedictine communities often talk about a rule of life of daily conversion, and I think that in going to university you often become a new person, and so that part of you needs to respond to the grace of Christ and commit to following him in your new life. That starts with hearing the stories of Christ, so I'd commit to reading a gospel in your first term of university - you might see it in a new light!

You’re known for your love of fashion, and you rock the leather jacket! How would you respond to those that think that’s not appropriate for a vicar?

Ha! That was just one piece I did for the Times Women's supplement at a time when we'd just lost the women bishops vote and there was a lot of press about how faith was bad for women. It went a bit viral! However, I stand by the message that it's important to talk about how God is interested in everything human. The fashion industry has as many problems as any industry (look at the food industry!), but I think creating skilfully crafted garments that are aiming to make women (in particular) feel beautiful is something that can be celebrated. We should be looking for the good in society rather than the bad! I got a thank you card from Stella McCartney after I'd said in the interview that I thought she had a gift from God - she said no one had ever said that to her before.

If you could change one thing in the world what would it be?

That people understand the love of God. We waste so much time trying to be something - trying to look like a good Christian, trying to be powerful or famous - but the love of God is there, waiting for us all along. People justify all sorts of things when they feel oppressed and poor. They'll betray their best friend if they feel enough under threat. The love of God means that we are rich; we have this treasure that is kept safe for us by Christ that means we can be generous and kind and forgive and let people off with the bad stuff they do to us. It's powerful stuff! If the world got that, even if I and my little community got that, everything would be different.