Reading Scripture in Light of Jesus: The Bible as Discipleship 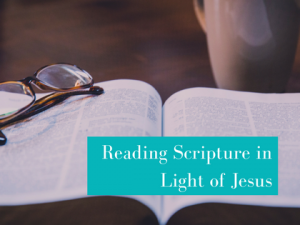 We all come to the Bible with our own ideas and points of view, so I will state up front that when I read Scripture, I read it keeping in mind the Anabaptist perspective and the Congregational way, not because I am particularly attached to those traditions per se, but more because I think they get it right in terms of putting Jesus in the centre of our journey into Scripture, and their idea of how the faithful community should structure itself.

Of course there was a time when, as a recently baptised Christian, I had absolutely no idea what to do with the Bible, other than clearly knowing what I did not want to use it for: marginalising and excluding people, denying science, supporting the ‘Principalities and Powers’. I knew everybody cherry picked Scripture for their own purposes, but I had no idea whether there was any sound way of doing so, or if I was forever to be trapped in postmodernist hell. I needed some help from theologians across the pond to realise that cherry picking can be grounded on something, or rather someone[1] and be done properly!

So, how do I read the Bible? I follow the Anabaptist maxim, “no one can truly know Christ unless he follows him in life, and no one may follow him unless he has first known him” (Hans Denck). To me this means discipleship does not end with our actions and words, but extends to the way we approach Scripture. If we want to follow the Lord, then we might as well read the Bible the same way he did, a guerrilla midrash, an Abba-centred cherry picking[2]. When Jesus quoted from Scripture he seemed to ask himself the same question all the time: “Is this representative of the character of the one I call Father?”, that is; is the written word consistent with the Word which Christ embodies? After all “the law was given through Moses; grace and truth came through Jesus Christ” (John 1:17) and everything Jesus did was a reflection of the true nature of the Abba (Col 1:15).

How do I read the Bible in order that it may testify to the character of God revealed in Christ Jesus? I read it through the eyes of the victim, which means acknowledging sometimes the Bible is an inspired account of our messed up idea of God and that “violence is no attribute of God” (Epistle to Diognetus) but rather a human projection of our own idea of justice (wrath) unto the One who is the non-retributive vindicator of Christ, the One who reconciled the world to Himself by means of the forgiving victim Christ.

To me reading the Bible means asking myself how Jesus would have, trying to discern the voice of Christ in the parables that were handed down to us, recognising the faithful apostleship of Paul when he applied the same exegetical techniques, and never forgetting that God is not revealed in the mighty acts of violence, but in the quiet wind of peace.

You can book your place for A Light For All here.

Tags:
The Bible
Discipleship
< Back to all blogs