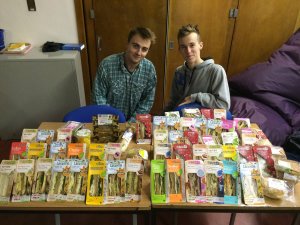 As the Methodist Society at the University of Birmingham looks back on its first term of the 2015/2016 academic year, we can happily say that we have made progress on our plans for a food exchange scheme made at the end of last year (http://www.movement.org.uk/blog/were-joining-fight-food-waste). The idea arose from a presentation carried out by SCM’s Stephen Atkinson on the extent to which food is wasted in this country and, in response to this, the ways in which students from Sheffield and Royal Holloway had set up schemes to collect and redistribute surplus food.

Our initial efforts to mirror this movement at Birmingham were faced with problems in the unwillingness of food outlets on campus to let us collect their surplus food. A common thing to hear when talking to staff on the shop-floor was ‘I think it’s a great idea, but we can’t because of our policy’. For many outlets on campus it was quite hard to get hold of managers, who became particularly elusive once the idea of collecting and passing on surplus food was mentioned. A main concern was over the health hazards of eating the food after its suggested shelf life, and in particular the legal ramifications of this for the outlets. In order to get around this, an agreement was written up, with the advice of Stephen Atkinson, stating that we would not hold the food for more than 4 hours at a temperature of over 8°C. We would also ‘indemnify the donor from any legal liability’ and had to agree to a change of name from University of Birmingham Food Exchange to Methsoc Food Exchange. After persisting with two outlets on campus and agreeing to these technicalities, we had their cooperation. After this, our next step was to find a group who could put to use the surplus food that we had collected. Again, this took longer than anticipated but in the end we found a homeless outreach group in the city centre who provide food and warm clothing to those in need on a regular basis.

We have now had a month and a half of running the food exchange and two things have become apparent: 1. Although we plan to grow as a scheme, the amount of food that is wasted weekly at the university (which serves as a microcosm for the country) is truly massive. 2. Although through the scheme we try to fulfil the immediate need to feed those who are hungry on our streets, the number of those who are hungry and desperate within this city alone is worryingly large.

It seems that as members of a Christian society at the university who feel a calling to challenge the social injustices that we witness, we not only need to carry out our immediate duty to alleviate the suffering of those around us, but also to simultaneously challenge the very structures and systems that create the problems we see. This latter challenge is something that we can collectively look at as a society and with the Student Christian Movement in the coming year.