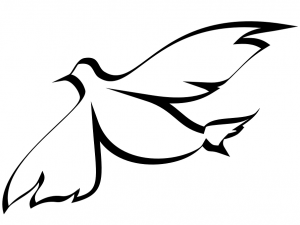 May 15th is celebrated by many peace organisations as the International Conscientious Objector Day, a celebration which we should use as a starting point to reflect on the depths of Christian tradition and history when it comes to political theology, and the issues of war and violence in particular.

Anabaptism – the radical reformation movement of the 16th century –  rejected the just war theory which was espoused by both the Catholic Church and the emergent Protestant churches, because it understood Christian life as discipleship committed to walking in the footsteps of Jesus (“Nobody can know Christ unless they follow him, and nobody can follow Christ unless they know him”- Hans Denck).

Further back in our common history as Christians, it is now believed by scholars that documents such as the Didache or even the Sermon on the Mount were used by the early Christians not only to model their own life in Christ, but also and most importantly to train catechumens. These writings, which teach a rejection of war and violence and a calling to be peacemakers and pray for one’s enemies, were lived out by candidates for baptism for years before they would be welcomed into the Church- people were tutored to “try Christianity on” by living non-violently.

Even if we look directly at Scripture we see a clear rejection of human violence and a human desire for violence: in Revelation, John expects to see a powerful lion, but instead he sees a lamb; Jesus remains true to his mission even unto death, instead of letting Peter start a holy war; and he teaches his followers to turn the other cheek and walk the extra mile, rather than retaliating against our enemies.

Now this does not mean we are called to be passive when we become non-violent. If anything, Conscientious Objector Day shows us that that refusing violence has big consequences- it is 'costly discipleship' for us (see Dietrich Bonhoeffer for more on this idea of discipleship). Indeed, Walter Wink has shown that Jesus’ teachings are not about meekly accepting all sort of abuse, just as they are not about taking up arms and retaliating: Jesus teaches us a third way; one that does not react violently against evil but resist it nonetheless by turning its power against itself, or by forcing those who oppress others to realise that they are not superior (see an excerpt of Wink's work here).

As we remember conscientious objectors this month, we must also remember that we too are called to be peacemakers.

Simone is at the University of Essex and is the Science and Religion Rep on SCM's General Council.

Tags:
Peace
Jesus
< Back to all blogs