Reflections from a Christian Witch 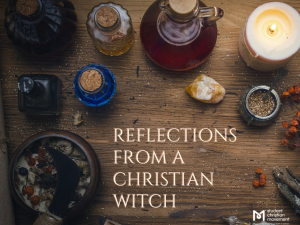 I’m a Christian, and I’m a witch. You could call me Christopagan, or a Christian Wiccan, although I don’t pretend to be an expert on any of those things. All I know is, I’ve done a lot of reading and a lot of research, and… in terms of faith, that’s what feels right for me right now.

I can’t really think or talk about my faith identity without connecting it wholly to my queer identity, because, for better or worse, they’ve both been such deep-rooted elements of my life. I was raised Church of Scotland, then move to the United Reformed Church when we moved to England when I was a kid. Everything was fine, really, with my faith identity when I was growing up; it was something we did, not devoutly, but it was always part of my life and our extended circle of family friends. It was home, and I was happy.

That was until I left home for university, and started at CU. I won’t go into too many details here, but I was mentally ill, a closeted queer and stuck in an environment of toxic evangelism.

My partner’s work with Interfaith groups is partly what brought me back. I started to meet those who were people of faith and queer and, gradually, my heart began to open up to ideas of Church again. Shortly before this I had sparked an interest in the medicinal properties of plants, and began to realise I had a lot of beliefs that were technically Pagan and Wiccan. I was kind of wary of the idea of “being a witch” right up until I had friends who considered themselves witches. I had shied away because I thought it didn’t work with my own faith structure (despite drifting away from Christianity, God was still very much there); that it was dangerous and consorting with “the devil”. It’s not; my branch of it isn’t. And funnily enough, appreciating nature and Mother Earth through practising witchcraft brought me back to my Church roots, at the same time that I was beginning to reconcile my queer identity with that of my Christian upbringing.

For me, the two parts of my faith complement each other. I believe God is nature and vice versa - we’ve been given these gifts by God and if I can use them to spread health and happiness, I will. I consider myself a kitchen witch because I’m happiest when I’m working with herbs like rosemary - whether that’s to purify the air around me or adding it to a soup - and I’m also happiest when I’m cooking for others and sharing that way. Being a witch – to me – is about not only this but setting intentions and being mindful; understanding myself and what I need within a particular moment.

In the same way, I believe in Jesus. I have always tried to live his teachings and to love radically. He’s always been there in everything I do. I just needed to meet the right people who could tell me that I was allowed to love Jesus and be queer, and not that my queerness was something to be “loved but not condoned” by other ‘Christians’.

As I get older I realise it’s important to see that faiths come from similar ideas and we believe what we believe. Do no harm to others. Protect the Earth as God left it with us, and fight for those on the margins. I try and remain firmly grounded - as well as herbal teas, I take antidepressants; I both pray and continue to have counselling sessions. Practising within different faith backgrounds has reminded me about how everything in life needs to be a balance.

In the end, those three things - Christianity, witchcraft and queerness - threaded together at a very specific point in my life. They’re interlocking and reinforce each other for me - and give me purpose and direction in life. I don’t have all the answers and I’m still learning every day - but I’m here to spread joy and love, I guess, and to look after others as well as myself, and I wouldn’t have it any other way. It brings me peace when I truly need it.

Written by Fiona Hardie. Fiona was raised both Church of Scotland and URC, and would now consider herself somewhere in the middle. She currently works on an internship programme for students and enjoys reading a lot of queer literature. She has a very excitable cat called Sebastian.