The Refugee Campaign so far… 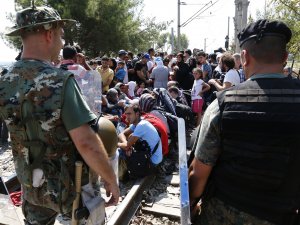 At the beginning of the last academic year, SCM launched a campaign in partnership with Student Action on Refugees (STAR). The main focus was on STAR’s Equal Access campaign- lobbying the government for equal opportunities for refugees and asylum seekers in our higher education system, and encouraging individual universities to give bursaries to refugees. However, we also encouraged student groups to get involved locally, nationally and internationally with campaigns and volunteering- helping refugees in any way they can.

Many students around the country have begun to look into what they can do in their own localities and further afield. At Roehampton university, the assistant chaplain has been organising volunteering projects, Cambridge SCM are hoping to begin campaigning on student scholarships soon, and SCM Glasgow invited Syrian refugees to speak to the Scotland regional gathering last weekend.

Students from SCM groups in Birmingham, Worcester and Leeds came to a Refugee Action-Reflection Day that SCM organised in February 2016, and since that event Birmingham Methsoc and Leeds SCM have both said that they are discerning what they can do this year to help as a group. I am now offering a workshop on the Refugee Campaign and quite a few SCM groups have booked it, so there is a lot of interest from students, which will hopefully convert into action! If you want to book the workshop for your group, just go here: http://www.movement.org.uk/faith-action-workshops-0

The issue has not gone away. It is still as important as ever that we do what we can to make a difference to refugees in this country and around Europe generally. The French government are threatening to shut down the Calais camp- again- and this time it seems likely they will do it. There are hundreds of unaccompanied minors in the camp, many of whom have a right to be in the UK, because they have relatives here. These children will be even more open to abuse and trafficking if the camp closes- our government must hear their cries for help.

I would urge all student groups around the country to look into what they can do for the children of Calais, but also for the refugees landing in Greece and those who are navigating our cold and indifferent asylum system here in the UK. There are so many great charities and organisations to support or get involved with: Calais Woodyard, Citizens UK, STAR, Christian Peacemaker Teams, Peaceful Borders, as well as many local charities in your area. You can also write to you MP and educate others through film nights and speakers.

I look forward to hearing about how you take forward our campaign in 2016-17!

Tags:
Refugees
Faith in Action
< Back to all blogs