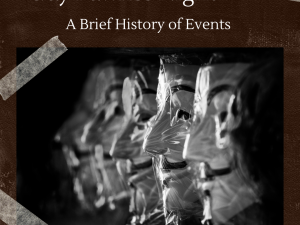 Every year, on the 5th November, people across the UK gather in fields to watch the fireworks, dance with sparklers and eat toffee apples as a crude caricature of Guy Fawkes burns atop a bonfire. Often referred to interchangeably as Guy Fawkes Night, Bonfire Night and Fireworks Night, we come together to celebrate the same day in 1605 that the Gunpowder Plot to blow up parliament and kill King James I of England was foiled. Guy Fawkes, the most famous of those involved in this infamous caper, was imprisoned, tortured and executed by the crown for high treason.

Why do we celebrate an attempted assassination?

Why do we burn the likeness of Guy Fawkes for fun?

What is the meaning of Bonfire Night?

It is interesting that other countries celebrate days in which their past governments were overthrown, such as 4th July in America and Bastille Day in France. However in the UK, we celebrate the day a group of noblemen failed to do the same. Aside from enjoying a brightly lit sky and sugared fruit, our yearly celebration of the 5th November is arguably rooted in a long and sordid history of anti-Catholic rhetoric in the UK.

The Tudors (and one Stuart King)

Before continuing, please watch this short video from Horrible Histories discussing the religious history of the British monarchy.

Much like the majority of Europe, England was monarchically Catholic for many hundreds of years until the reign of Henry VIII. Famously, he founded the Church of England in order to divorce Catherine of Aragon before marrying Anne Boleyn, a Protestant. Under his reign, known as the Dissolution of the Monasteries, hundreds of ancient monasteries were looted and destroyed while those of their pacifistic occupants (e.g. monks, friars or nuns) who refused to accept a pension were executed. Through the diminishment of their religious traditions, Henry began forcing his citizens to convert to Protestantism while those who did not were robbed, imprisoned, tortured or executed for their denominational beliefs. Though Queen Mary I (Bloody Mary) sanctioned the execution of those who refused to call themselves Catholic, “her reign saw far fewer people executed than either her father or her half-sister Elizabeth” (Wheeler, 2020). Just over half a decade on from Henry VIII’s death, under the rule of King James I Catholics continued to face cruel and sometimes violent persecution.

In 1605, led by Robert Catesby, a group of Catholics plotted to assassinate the king and blow up the House of Lords in an attempt to end the oppression they faced at the hands of their own government. Not only did the plot fail and the plotters fate fall to execution, attitudes worsened as an anti-Catholic national mentality was solidified into law, history and holiday.

Penal Laws introduced during the Stuart Era were designed to diminish the rights and freedoms of Catholics. As a result of these laws, Catholics were not allowed to join the British Army or Navy, be members of government, practice law, vote, own, buy or sell land, go to school or join apprenticeships, nor could they own a weapon. Test Acts and Acts of Uniformity were especially instrumental in preventing Catholics from practicing their religion or having freedom in society. With 80% of Ireland’s population being Catholic, England’s indifference and failure to intervene in the Great Famine is believed by some to be the result of a combination of xenophobia and anti-Catholicism. “The Catholic Church was outlawed. The Gaelic language was banned” (The History Place, 2000). Renting land from Protestant landowners living in Britain was the only way for farmers to work, yet expenses sent them into poverty and the potato blight caused their deaths. Ireland’s self-sufficiency and industry was “deliberately destroyed”; as French politician Gustave de Beaumont observed, England made of Ireland “an entire nation of paupers” (The History Place, 2000).

As one million people died due to famine, and another million emigrated Penal Laws were able to “degrade the Irish so severely that they would never again be in a position to seriously threaten Protestant rule” (The History Place, 2000). Post-World War Two, in the 1960s and 70s in particular, it was not uncommon to see signs hanging in shop windows and lodgings that read “No Irish Need Apply” (known as NINA signs). Or, as the controversial 80s photograph states, “No Irish. No Blacks. No Dogs” (Murray, 2015). When depicting Irish Catholics, it became common practice for cartoonists to draw them as apes, drunkards and violent vagabonds. Thomas Nash, dubbed the ‘Father of the American Cartoon’, has portrayed Catholic bishops as crocodiles attacking school children (The American River Gauges, 1871). Most significantly, in his cartoon The Usual Irish Way of Doing Things Nash depicts a bestial Catholic Five Points Irishman, rowdy and drunk, as he sits atop a barrel of gunpowder.

Yet, can we really judge Nash when we ourselves still burn the effigy of Guy Fawkes?

It wasn’t until the 18th and 19th century that the process of Catholic emancipation began to remove the legal restrictions put upon people’s lives. British law still requires our monarch to be Protestant and, until 2011, it was illegal for the monarch to marry a Catholic. We have never had a Catholic Prime Minister. Tony Blair actually delayed his conversation until he left office out of fear that it would cause concern among the public. Notably, Catholic priests have been branded and over-generalised as sexual abusers and paedophiles, yet other religions, denominations and secular organisations are not discussed in this way. There is extensive evidence estimating that there is more abuse within Protestant churches despite them combined having a smaller population than Catholicism on an international scale.  Abuse of any kind is foul, but the media’s willingness to singularly villainise Catholicism continues to fuel “long-established patterns of anti-Catholicism” in the UK and America (Gresham College, 2019), a hatred that is linked closely to anti-Italianism, Hispanophobia  and anti-Slavic (specially anti-Polish) and anti-Irish sentiments.

The narrative that the church is merely a “cruel hierarchy, whose religion is a cloak for its authoritarian instincts and its brutal lusts”, is one that has been contributing to insidious ignorance about the denomination for many hundreds of years (Gresham College, 2019). Much like the primitive ape-like cartoon characters who live by drunken hedonism and not by virtue, Catholics are still assumed by some today to be morally lax, inherently corrupt and theologically unlawful. Thereby, on 5th November, we burn Guy Fawkes for his crimes.

Check out our social media for more information about how the face of Guy Fawkes has come to represent rebellion in the 21st century. We discuss if he is an appropriate symbol of protest - feel free to chime in in the comments sections or email us with your thoughts!

Some things to think about: