Renewed and Rebellious: What I Learned from JPIT’s 2020 Conference 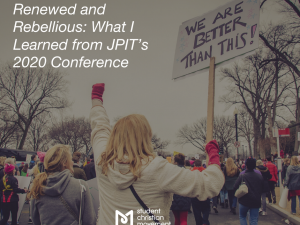 On Saturday 7th March, I went to JPIT’s national conference in Derby. The conference’s title, “Renewal and Rebellion: Faith, Economy and Climate” could not have been more relevant to the issues we are currently facing as a community, country and world. So, I expected good things. It’s fair to say that I was not disappointed!

The conference began with a short period of worship, including a special rendition of Andrew Graystone’s “One Day” song (perhaps familiar to Greenbelt fans?) re-worded to encapsulate the themes of the conference. Although this wasn’t the most sing-able version, it did serve as a good foundation for the rest of the day. After this was a panel featuring eminent voices from theology, economics and politics – namely, Professor Anthony Reddie, Katherine Trebeck and Barry Gardiner MP. Reddie offered insightful commentary on the relationships between slavery, empire and capitalism, stating that we – as citizens of the West – are “the Romans” in the current situation. He also suggested that we have forgotten the usefulness and necessity of limits outlined in biblical passages, such as God instructing Adam and Eve not to eat from the tree of knowledge and the whole idea of the Sabbath as a day of rest. Trebeck’s message was not dissimilar, arguing that the ideology of exponential economic growth and the concept of GDP were both unsustainable. This was perhaps best demonstrated by her use of economist Mark Anielski’s example that “the ideal GDP hero is a chain-smoking terminal cancer patient going through an expensive divorce whose car is totalled in a 20-car pileup, while munching on fast-take-out-food and chatting on a cell phone”. Although greeted by laughter around the room, this point stuck with me. Our current economic system is based on an unsustainable and undesirable model. We need to do something to change this. Barry Gardiner offered practical evidence of how change can be brought about, talking in depth about the 2008 Climate Change Act, and emphasised the importance of legislative frameworks that force somewhat unwilling governments to do what is best for the world.

After this panel finished, the three panellists led their own sessions. As someone very interested in politics (you kinda have to be to study it at both undergrad and postgrad!), I went to Barry Gardiner’s session. Gardiner was very honest in his answers to audience questions, suggesting that writing to your MP or signing an e-petition were often fruitless endeavours. Instead, he urged those in attendance to have a face-to-face encounter with their MP and put them on the spot about how they will vote on a certain bill. Barry also talked about ‘climate justice’ and ‘just transition’, and powerfully stated that “if you want peace in the world, create justice…if you want justice, live sustainably”. This sentiment summarised the conference perfectly, whilst also echoing the importance of limits that Anthony Reddie outlined in his remarks during the opening panel. On a personal note, it was very cool to find out that Barry Gardiner used to work for SCM in Scotland - no wonder he had such insightful thoughts!

At this point, we broke for lunch and I ended up talking to a fellow attendee about SCM, Jubilee Debt Coalition and all sorts of other progressive Christian organisations. Often it’s hard to remember that there are like-minded people out there, but through organisations such as JPIT (and SCM, of course) I am reminded of how many fellow progressive Christians there are! After lunch, I attended a workshop run by Sue Richardson, Theological Education Adviser for Christian Aid. The session was concerned with exactly what resources Christianity can bring to engage with the climate crisis. Richardson highlighted five elements of our faith that can play an important role in doing this. Firstly, the grand narrative or “big story” that Christianity is based on can act as a powerful tool to offer hope in the face of despair. Community, scripture and tradition, liturgical practice, and mission were the other four elements. Community can be used effectively to instigate action, both scripture and tradition as well as liturgical practice are rich resources to situate the crisis we are facing. Mission, of course, is crucial to our faith and necessary if we are to challenge the climate emergency.

After this session, we heard from a panel of young climate activists. Isaac Harvey, Ali Greaves and Aaron Smith all served as inspirational examples of both how faith can lead to activism, and the urgency with which young people are acting in light of climate change. Two of my favourite moments of this panel were Ali and Aaron’s messages to politicians at COP26 to “back off, stop lying and do something about it”, and “leave your flags and ties at home”. Perhaps this shows that young people recognise the severity of the issues we face and that they’re a little tired of men in suits saying that everything will be fine. The final session, a talk by CAFOD Director Christine Allen, talked about the theological move from dominion over the environment to unity with the environment. Allen also emphasises four Cs to summarise the conference: the importance of Creation, the Connectedness of global issues, our Culture of encounter, and Conversion of heart. These concepts are all useful in explaining the unique contributions that people of faith can make to climate activism and put a nice finish on top of what was an engaging and inspiring day. All of the insightful sessions and enjoyable conversations I participated in certainly left me feeling renewed with hope and imbued with a rebellious spirit.

I hope that I managed to do justice to all of the brilliant aspects of the JPIT Conference, but if you want to find out more or read other people’s takes on it, #JPIT2020 is the place to go.