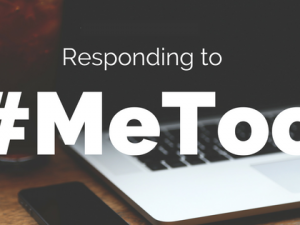 Content Information:  This blog post discusses and refers to sexual assault and abuse in a non-specific way and contains no descriptions.

Every year, Time Magazine names and profiles a “Person of the Year” – a person, group or idea that has done the most to influence the events of the year.  Time recently announced their choice for 2017: The Silence Breakers, those who have spoken up to reveal and condemn widespread, institutionalised sexual abuse.  One of the major turning points of this global movement was the viral spread of #MeToo on Twitter and Facebook.  The term “Me Too” was actually coined on MySpace by Tarana Burke back in 2006 to promote empathy and solidarity among women of colour.  It’s important to note that this is yet another example of a situation where women of colour have been dealing with and speaking out against something for years, but it only takes off when white women speak up.  That’s not acceptable, and we need to address that racial inequality alongside the sexual inequality – one issue does not trump the other.

As a white cisgender male, it broke my heart to watch so many of my female friends and colleagues speak up to say that they too have been sexually harassed or assaulted.  I was upset, I was angry, and ultimately I was frustrated because there was nothing I could contribute.  That’s not entirely true. I could have used the opportunity to tell everybody that I wasn’t like that, or explain how sad I was about it all.  But that would have only served myself, because anything I said on the days the hashtag was spreading would have diluted or distracted from the powerful and overwhelming voice of women around the world shouting “There’s a problem here and there has been for a long time.”  Privately, I was devastated and furious and my prayers reflected that.  Publicly, I was silent.

I was silent because this topic isn't about me. This isn't my story.  My pain does not compare with decades of pain and discomfort felt by the women posting #MeToo.

Men: I believe that we must realise that we are all responsible for this.  Each of us has to say: Me Too. I too have allowed, and do allow, this to happen. I too have contributed, and do contribute, to environments that make women feel uncomfortable. I too have been, and am, complicit. Past AND present tense.  If that doesn’t feel true for you today, if you disagree with me, I really want to encourage you to pray about it.  I may be wrong… but what if I’m right?  Praying about it can’t hurt.  Here’s the kind of prayer that I find helpful:

Lord God, help me to love and respect the women in my life the way that you love and respect them.  Reveal to me the areas of my life in which I can do better.  Help me to listen and trust women when they reveal problems with sexual inequality.  Help me to be led by your wisdom instead of believing the lies of patriarchal systems in society.  Reveal to me what it means to be a man in Your Kingdom.  Work in me, and change my heart, Lord.

These issues aren’t exclusive to secular society; the Church has just as much share of the blame.  Women in our churches need to know that their voices are heard.  They need to know that church is a safe space, but for that to be the case, we need to make it a safe space.  We can all be a part of that.  Are there systems in place for somebody to report inappropriate behaviour?  Does your church practice any kind of physical touch that somebody might not be comfortable with?  Are women’s suggestions and criticisms taken as seriously as men’s? These are the kinds of questions we can start asking to get our own houses in order.  Ultimately, society needs to change so that we no longer raise our children to believe that this behaviour is normal or appropriate, and the church should be on the front lines of this fight.  If our churches look like Hollywood, things are seriously wrong.

The women who are challenging and speaking out against sexual assault and misogyny are inspiring and influential.  I completely agree that they should be Time’s People of the Year.  They are doing so much work and risking so much to improve a situation they never asked for and do not deserve.  I’m still learning how to be an effective ally in this fight, but I know that we men must do more to help.  We need to call out other men when they speak or behave inappropriately; it can be as simple as saying “That’s not cool.”  We need to teach ourselves and others about consent.  We need to defend and speak up for women when their voices aren’t being heard, without taking over the conversation or expecting praise for doing the right thing.

As Christians, we are called to love our neighbour.  And it has never been clearer that our sisters around the world are in need of love.  Real, revolutionary, powerful, transforming, Christ-like love.

If you want to find out more, or take further action, these webpages have collated some appropriate resources.

Disclaimer: In this post, I talk primarily about abuse perpetrated against women by men.  My decision to focus on this should not be taken as suggesting that this is the only form sexual abuse can take.  Men can be victims, women can be perpetrators, and there are legitimate concerns that the transgender community is being sidelined by the topics I raise here.  It is important to acknowledge everyone who is affected by these issues, and I leave the detailed discussion to others who are much more qualified than myself.