A Response to the Church of England's Pastoral Statement 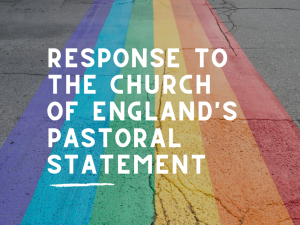 A response from the Student Christian Movement on the Church of England’s pastoral statement regarding civil partnerships.

A painful reminder of the Church’s position

It seems the House of Bishops has let the Church of England down in the following ways:

1. Continual exclusion of LGBT+ people in the Church

The statement reiterates the position that sex is only for marriage, and marriage is only for those in ‘heterosexual relationships’ (a complicated term in itself, as many people in heterosexual-appearing relationships are not heterosexual themselves). A large number of the members and workers in the Church of England – both lay and clergy – are LGBT+, and this statement insinuates that many of their relationships should be “sexually abstinent friendships”. This is truly heartbreaking for so many - to be recognised as less-than, and to have it reaffirmed that their community will not bless their relationships through this statement. SCM believe that we are all made equal in Christ Jesus. We therefore believe that LGBT+ identities should be celebrated, and not used as a basis on which people and their relationships are excluded. Marriage is about commitment and love, and not about the kind of sex people have. Marriage between two consenting adults, therefore, should be celebrated regardless of sex or gender.

The statement is also a worrying reflection of purity culture ideology, which uses shame to police people and their bodies. The teaching that intimacy outside of opposite-sex marriage is always sinful perpetuates a sexual shame which has harmed many. The insistence that intention to have sex is an integral part of marriage worryingly reflects thinking which ignores consent, respect and autonomy in relationships. The idea that romantic relationships must involve sex ignores those people who identify as asexual, and implies the ways they express love are not good enough. Similarly, to claim that any other expression of love is “falling short of God’s purposes” is so painful to hear. SCM maintains that regardless of the nature of a relationship between two adults, sex should be consensual, safe, and involve vulnerability and respect for that of God in those participating.

3. An attempt to speak on behalf of all Christians regarding sex and relationships

Finally, it is concerning that the Church of England implies that it is presenting the ‘Christian’ position on marriage, as though there is only one. It is difficult to claim to speak even for all of those Christians who share a similar tradition, as Anglicans belonging to the Scottish Episcopal Church already celebrate same-sex marriage. Many Christians of all denominations, including our members, believe in equality and therefore support same-sex marriage. They also reject harmful ideas about sex which perpetuate shame and put true vulnerability and intimacy at risk.

The greatest of these is love

The lengthy statement from the Church of England fails to mention ‘love’ once. Our greatest commandment is to love, and this love is not exclusive. SCM fully acknowledges, loves, and recognises LGBT+ people in the fullness of their relationships, and we pray that the Church of England will see them as God does – worthy of unconditional love.