The Role of the Church in Declaring Black Lives Matter 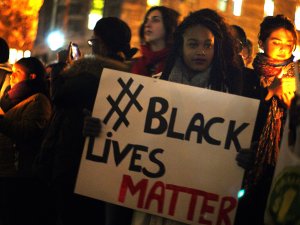 The Black Lives Matter movement is firmly grounded in the context of Black American lived experience. It exists out of the context of crisis and outrage, which insists that attention be focused on Black lives because of the ways in which they are systemically devalued by American society.

One of the key areas of focus in the US concerns the number of unarmed Black people killed by police. There were 135 killed in the first part of 2015, for example. This is twice the number of unarmed white people killed by police in that same period. In the UK, the number of deaths following police contact has declined since 2006, although it is still of concern. The Black Lives Matter movement in the UK has only recently emerged but there may be lessons to be drawn from Britain’s experience.

Here in the UK, the Black Lives Matter movement recently adopted rallying as a form of action to demand change. However, just how sustainable the movement will be is dependent on a strategy which moves beyond the politics of protest. It is also necessary to appreciate how race interacts with other social factors which impact on Black identity.

Historically, the power of the Black Church has been to give voice to Black experience, and challenging racial oppression has always been a central part of this. So what might be the role of the Black Church in the Black Lives Matter movement? I would propose that a major part of its role in the movement is to create a coherent Black liberation narrative.

The teachings of my faith tell me that Black people (and all persons) are created in the image of God and therefore Blackness has intrinsic worth and value. For me, Black Lives Matter is an obvious truth in light of God’s love for all of God’s people. It is self-evident that God cares about Black lives.

In my own research, conducting interviews, I have discovered stories which point to the importance of giving a voice to Black lives at the intersection of race, gender and sexuality. When the Black Church chooses to speak out intentionally against oppression, is it, in fact, insisting on the intrinsic worth of all human beings? During an ongoing research process, my exploration has changed from a single narrow focus on race to that of a comprehensive  understanding of the term ‘Black Lives Matter’ which expands beyond issues of race and class, to include sexuality and disability as major areas of discrimination which impact on Black life in the UK.

I believe that this is what it means to express a faith in Christ, a faith which articulates how God loves us: by saying that all Black Lives Matter. The Black Church must express its passion for human rights and all issues of social justice in Black communities. There is not a monolithic Black Church. However, neither is there one Black sexuality or gender. The role of the Black Church should be to strive to speak into and out of the world and community in which we live, which includes people with varied backgrounds, sexualities, genders and abilities. Only by doing that can it hope to add something of value to the Black Lives Matter movement.

Omari is currently a full-time PhD research student at Vrije Universiteit Amsterdam and The Queen’s Foundation for Ecumenical Theological Education, focusing on issues of intersectionality, race, gender and sexuality. The study is in its write-up phase.

Tags:
Churches
Theology
Black History Month
< Back to all blogs