Running to do good: a new approach to voluntary action 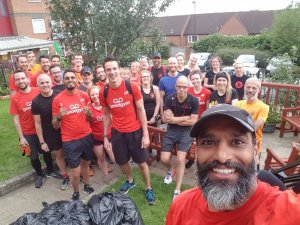 The idea for GoodGym arrived when founder Ivo Gormley began jogging to the home of a family friend who was housebound. Finding that his regular run now had a purpose beyond his own fitness goals, he applied the idea to help more people and launched a running group that got fit by doing good.

From an initial three groups in London in 2014, GoodGym now has regular running sessions in a number of cities in England and Wales – with more to come across the UK. The runners perform three types of activities: weekly group runs to a community project or charity to help with physical work such as litter-picking; 'missions' to assist older people with one-off tasks like gardening and odd jobs; and regular social visits to isolated older people. These people are called 'coaches' in GoodGym lingo, because they motivate the runners to lace up their shoes and get moving – even if it's raining.

I joined the Birmingham branch of GoodGym this year, following its launch on a dark January evening with Paralympic gold medallist Jonnie Peacock coming along for moral support. Each Tuesday around a dozen of us complete a group run: approximately 3km to a task, then the same distance back to base, broken up with a bootcamp-style fitness session. No-one is left behind – a nominated back marker stays with the slowest runners – so it's not as intimidating as it might first appear. If you can run, however slowly, for at least 15 minutes, you're in.

The tasks vary from week to week, ranging from clearing litter from our adopted stretch of canal in the city centre, to weeding a community centre garden, to acting as couriers for a charity that lends smart attire to people attending job interviews. A regular task is serving dinner at Birmingham City Mission, a Christian organisation that helps people who are homeless or otherwise in need with food, clothes, toiletries and support.

Each organisation we have worked with makes the same remark: the same work would have taken them much longer. A dozen or so people getting stuck in for half an hour can achieve as much as one charity worker in a full day or more. This knowledge gives GoodGym members the impetus to keep coming out on Tuesday evenings, to help their group make a bigger difference.

With one-to-one coach missions, this impact is even greater. According to Age UK, more than 1 million people aged 65 and over say they always or often feel lonely, so regular visits from a GoodGym runner (however red-faced and sweaty they are when they arrive) can give a huge mental boost to coaches. Of course, the younger members of the partnerships benefit too; many have made firm friends with their coaches, who also provide a great incentive to go out for a run and get fit.

For me, the wider community aspect of GoodGym is what sets it apart from other voluntary projects. By partnering with a number of organisations across Birmingham I'm learning more about the city and all the amazing things people do here. It's distressing to know how much help is necessary, but by learning about social issues and lending a hand to those working to solve them I feel I'm doing something good.

As a bonus, my running speeds have increased too. Luckily good health is a gift that can be shared.