Saints and Politics: What Could Theresa May Learn from St Teresa of Avila? 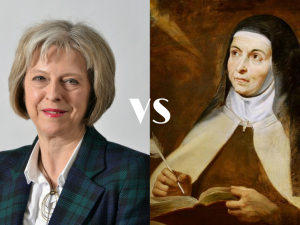 For only the second time in our political history, the UK has a female Prime Minister, Theresa May. Many have been quick to compare her to the first female Prime Minister and fellow Conservative leader, Margaret Thatcher. I would like to posit a different – and, dare I say, more interesting – comparison: one between Theresa May and a namesake saint.

There are plenty of noteworthy saints with a similar name, particularly from the last 150-odd years: St Thérèse of Lisieux, St Teresa Benedicta of the Cross (both from the Order of Discalced Carmelites), and Blessed (soon-to-be-Saint) Teresa of Kolkata (more commonly known as Mother Teresa). I however wish to consider one of my favourite saints: the Spanish mystic St Teresa of Avila (1515-1582), co-founder of the Order of Discalced Carmelite movement and one of only four female Doctors of the (Roman Catholic) Church.

Name and gender aside, there are interesting comparisons between Theresa May and Teresa of Avila. Both were educated by nuns/religious sisters: May is said to have briefly attended an independent convent school, whilst St Teresa’s early education was conducted by Augustinian nuns. Both share a strong commitment to their faith: May is the daughter of an Anglican vicar and was known to regularly attend Sunday church services near her former residence. One could also say that both women proved unpopular with those around them: Theresa May with fellow politicians, even sometimes within her own party, and St Teresa with those who wished to prevent her from establishing a new order. Working within largely patriarchal hierarchical systems (be it government or the Roman Catholic Church), both May and St Teresa had the odds stacked against them; yet they successfully overcame such hurdles to take powerful positions within their organisations. History will surely forget neither woman.

One of the most striking things for me about St Teresa of Avila is her role as a reformer and innovator within the Church. She was obedient to her confessors and spiritual directors but equally, she was not afraid to challenge the status quo and to fight for what she considered to be God’s will. We see inklings of this in the early days of Theresa May’s PM-ship: her first speech as the new Prime Minister heralded a renewed Conservative party pledge to serve all the people of the UK and their needs – not just those of the elite few. Only time will tell whether such a pledge materialises.

May can channel the instincts and unstinting determination of St Teresa of Avila, in order to bring about a better society through her leadership. As a Christian from a denomination that recognises Teresa of Avila’s sainthood, May should take courage from the example set by her namesake saint. Reformation of a political party, let alone a nation’s society, is hard work; but this should not deter her from making bold and hard decisions, in order to provide greater equality, freedom and justice. As St Teresa famously said:

Tags:
Politics
Theology
< Back to all blogs