SCM Britain's Statement on the Situation in Palestine 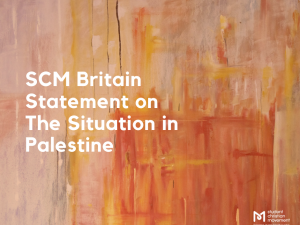 SCM Britain celebrates the news of a ceasefire between Israel and Palestine, but we recognise that this is the first step and not the last. We stand in solidarity with the people of Palestine and call upon SCM members and the wider Church to continue to learn about what’s happening, raise awareness in our communities, amplify Palestinian voices, and take action.

At least 230 people, including 65 children, have been killed by Israeli airstrikes in the Gaza Strip since the latest violence began. Although many media outlets point to violence from both sides, it must be acknowledged that Palestine is the much weaker occupied group who have had refugee camps, hospitals, media outlets, and other civilian buildings targeted by high-tech Israeli attacks. Israel’s military is given billions of dollars in military aid each year and their actions are met with impunity from Western governments, while Palestinians are disproportionately criticised and further oppressed. SCM Britain condemns all violence.

The World Student Christian Federation, the international group of Student Christian Movements to which we belong, passed a policy paper in 2015 to support and advocate for the Palestinian communities based on international law, a Human Rights perspective and the theology of liberation perspective on the preferential option for the poor and those who are oppressed. As part of this, we believe that Christians cannot remain silent in the face of the human rights violations, war crimes, ethnic cleansing, and apartheid that is currently taking place in Palestine. Below are some resources for learning and action.

The Human Rights Watch report “A Threshold Crossed: Israeli Authorities and the Crimes of Apartheid and Persecution”

You can also join this Palestinian Liberation Theology Reading Group that SCM Member Victoria Turner is starting. Get in touch with her to register your interest at V.A.Turner@sms.ed.ac.uk.

Find out how you can get involved through Palestine Solidarity Campaign
Email your MP. Find out who your MP is here: https://www.theyworkforyou.com/
< Back to all blogs