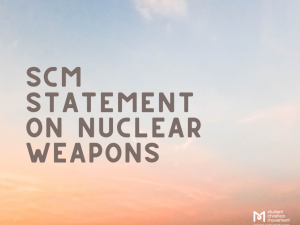 Following the announcement of new plans to increase potential for nuclear weapons by the UK government, the General Council of the Student Christian Movement have issued the following statement:

"The UK government has announced plans to allow for the expansion of the Trident nuclear warhead for the first time since the Cold War. The potential expansion is estimated to cost £40 billion. The Student Christian Movement is opposed to nuclear weapons and calls for full nuclear disarmament. This decision by the government is a step in the wrong direction. Instead of expanding Trident, the government should be looking to ratify the UN Treaty on the Prohibition of Nuclear Weapons.

We call on Christian individuals and organisations across the country to make it clear that they too oppose this decision. Central to the gospel is a message of peace and justice; neither of which are achieved through war and the stockpiling of nuclear weapons.

We call on the UK government to reduce the size of the Trident nuclear warhead and invest the £40 billion elsewhere, such as the NHS, so that this money will promote wellbeing and justice."

If you would like to take action on this issue templates for writing to your MP can be found here, provided by Nuclear Explained.

Tags:
Faith in Action
Peace
< Back to all blogs