SCM at the 'Stop DSEI' Day of Action 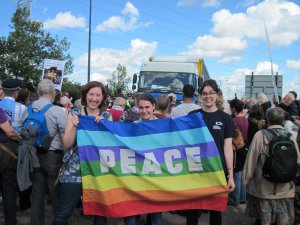 On Saturday 12th September, a small group of SCMers joined activists and Christians in a day of action against the Defense and Security Equipment International exhibition (DSEI) at the Excel Centre in London. The event followed a week of action leading up to the day, including a 'No Faith In War' day of action by faith groups on the Tuesday, where Ruth, our Faith in Action worker, represented SCM.

The day started with a silent meditation outside the Excel Centre, which around 40 people joined in with. Personally, I reflected on the brokenness of a world in which rich countries and businesses make money from the destruction, violence, and heartbreak of war. It was a humbling experience, acknowledging our part in the brokenness, while also feeling the privilege of being able to express our outrage that the event was taking place, and to do what we could to stop it.

Lorries carrying weapons into the arms fair showed up at around noon, and we managed to form enough of a blockade by standing in the road to stop anyone entering the arms fair by road for an impressive five hours! Despite constant police presence, activist groups were able to work together to coordinate blocking the only two entrances to the event at each end of the huge building, which gave us hope and determination to carry on our protest for as long as we could.

While we were standing in the road, musicians played songs of outrage and encouragement to keep us going through the afternoon, and people sang, danced and waved banners. We also heard from activists from Mexico and Bahrain, countries where the weapons sold at DSEI sustain conflict and oppression, who expressed gratitude for our support and solidarity. The atmosphere throughout the day was charged with hope as we demonstrated our objection through peaceful direct action.

The link was made more than once between the arms trade and the current refugee crisis, and it was poignant that the marches across the country in solidarity with refugees occurred on the same day as the big day of action at DSEI. The people who come to our country needing our support and welcome are only here because of the violence and danger in their own countries, caused by the very people who were in attendance just metres away inside the Excel Centre. It was a disturbing but necessary link to acknowledge.

After the event we were exhausted, but felt thoroughly pleased and honoured to have been able to join in with the day of action. You can follow the protest actions on twitter via the hashtag #StopDSEI.

Tags:
Arms Trade
Faith in Action
< Back to all blogs