Seven Priests Walk Into A Bar... 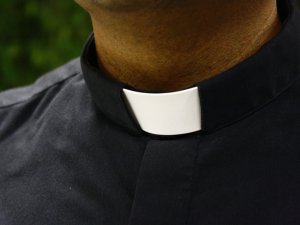 A story appeared in the news recently where several students for the Catholic priesthood were denied entry to a local pub in Cardiff. They were there to celebrate the ordination of a fellow student, and because of their unusual priestly garb the bar staff refused to serve them, thinking they were out on a stag do. After some minutes of trying to persuade a member of staff to let them in, the manager came across and asked if they were the real deal. The manager, now convinced of their holy status, apologised to the group and brought them a round on the house. As the group entered the pub the locals broke out in applause, and the priests were more than happy to answer questions about why they were there and what they do.

In some of the comments made under articles about the incident, some people were asking about the significance of their clerical dress. In the Catholic tradition, priests wear black with a white collar, and this practice goes back to the middle ages - the traditional dress for Catholic priests was made compulsory in 1725 by Pope Benedict XIII. The attire has several meanings; the collar is a sign of obedience, the sash or fascia is a sign of chastity and the colour black is for poverty. If you saw a person wearing such things in everyday life, you could set him apart as a priest. However, in modern day, many priests and pastors have reverted to wearing a black shirt with a collar, sometimes not even having the collar in place. Despite this, they still carry out their vocation.

The priests in Cardiff provided a great opportunity to start a conversation with local people about faith and their life choices by wearing their cassocks in public. Since then I've been reflecting on how I present myself and how this shows my faith and gives witness to God. Some priests choose not to wear the collar in public or wear 'ordinary' clothing which can make them appear more approachable. This can be the same for us; we don’t have to wear a collar to show people scripture, to pray for someone or to have a conversation about God.