Should I Stay or Should I Go? Activism in Exile 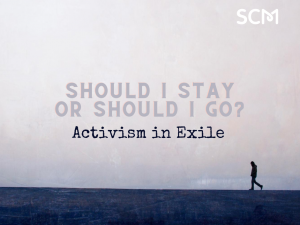 Over the last few months, we have been living in “lockdown”. It has been necessary for us to stay inside as much as possible, for our own health and the health of others. For many, this experience has provided opportunities for reflection, as well as time to simply escape from the world. This has been the duality of our situation since March: we are more aware than ever of all the injustice in the world, be that structural racism, the climate emergency or one of the many other burning issues we face, and yet we have become so used to our lives in exile. As we emerge from lockdown, how do we balance staying safe from Covid-19 and challenging the pressing issues of our time? To reflect on this, I’d like to draw a parallel. Although it is not that similar a situation, the plight of German theologians during the 1930s provides us with an interesting demonstration of what the “Christian” thing to do is when trying to balance personal safety with defeating injustice.

During the late 1920s and early 1930s, prominent German thinkers who were critical of Nazism were faced with the painful decision of whether to stay in their country and resist Hitler, or to exile themselves in a foreign country. The professors and lecturers most at risk were Jewish academics such as Walter Benjamin and Max Horkheimer. Understandably, these thinkers fled their country as staying in Germany would have led to inevitable death. For German Christians, the decision to go into exile or stay in Germany was less immediately pressing, as this community did not face the abhorrent discrimination targeted at German Jews and other marginalised groups. Yet, being "good" Christians, many leading theologians came to clash with the Nazi regime; despite its co-optation by the fascist dictatorship, true Christianity was and will always be incompatible with Nazism. The loss of their jobs at universities as the 1930s progressed meant that staying in Germany became even harder. This explains the decision of Paul Tillich to leave Germany in 1933 and move to America.

Other theologians stayed. Notable amongst the remaining few was Dietrich Bonhoeffer. As part of his ministry, Bonhoeffer moved to London in 1933. He stayed there for two years and, aware of what was going on back in Germany, could have stayed in exile. Despite having this credible option to live in safety, Bonhoeffer returned to Germany. To do this must have involved some sense of calling, though Karl Barth’s rebukes to his presence in London may have helped to persuade Dietrich back to Germany. What exactly can you do when your theological mentor writes to you, “I can only reply to all the reasons and excuses which you put forward: and what of the German church?”.  Whether it was Barth’s chiding or simply Bonhoeffer’s own call to return home, Dietrich returned. Once back in Germany, Bonhoeffer ran underground seminaries, became involved with the German resistance and eventually, conspired to assassinate Hitler. Bonhoeffer did not take refuge in exile. Instead, he ended up sacrificing his life as a result of his efforts to combat evil. Does this make Bonhoeffer a more faithful Christian than Tillich?

Whilst Bonhoeffer engaged in anti-fascism in Germany, Tillich became involved with the Fellowship of Socialist Christians in America. In the early 1940s, Tillich recorded over a hundred secret German language broadcasts for Voice of America. After the war, Tillich wrote his Systematic Theology and The Courage to Be. It cannot be said that Tillich was a "bad" Christian, simply because he carried out his discipleship in exile. Rather, it should be emphasised how true Bonhoeffer was to his own faith, that he worked tirelessly for justice under the Nazi regime, and eventually died for doing so.

How can we apply these two ways of discipleship to our current situation? Well, we can clearly identify injustice, as both Bonhoeffer and Tillich did. We can write and act against fascism and discrimination, as both Bonhoeffer and Tillich did. Whilst we may not be living under fascism, we exist under a system which is built on racism and exploitation. Whilst we may not have a Hitler to assassinate, we do have a planet to protect. There is so much that needs to be done, and so much that can be done.

Yet, the question of safety persists. If you are shielding at home, you are not expected to go to a protest. If you are not vulnerable and do go to a protest, we expect to see face-masks and hand-sanitiser (this is something that the Black Lives Matter protests have exemplified!). The global pandemic that we are living through shows us how important it is to be safe, whilst everything else that has happened in the last four months has shown us that massive injustices are still being perpetrated the world over. We should always strive to be more like Bonhoeffer, but in a situation where putting yourself at risk also puts other people at risk, perhaps we should be more like Tillich.

Written by Nathan Olsen. Nathan is the current Editor of Movement magazine, having previously been a member of SCM Leeds. He is studying for a Masters degree in Sheffield, writing a dissertation on the Jubilee 2000 campaign. Nathan is also SCM's resident Tillich expert!