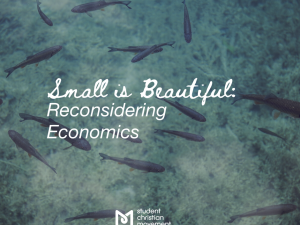 Economics is a political conversation-stopper. Whenever someone suggests something radical like eradicating homelessness, improving our education system, or properly funding our NHS, we are reminded that there is no magic money tree and that’s the end of that. If something isn’t economically viable then it’s just not going to happen. Most of us have no comeback to this, because we’re made to feel as though appeasing the mysterious ‘invisible hand’ of the capitalist market is the reserve of experts, and that it has the final say over what is and isn’t possible in our society.

This perception has started to change for me reading Small is Beautiful by E. F. Schumacher. Schumacher was a leading economist in the 20th Century, and having taught university economics at the age of 22, spent most of his life in business to gain practical experience of the theories he was an expert in. Later in his life his expertise was sought globally, and he was world renowned in his field. And yet this book, published in 1973, is simple and clear, and full of insight which is just as relevant today as then.

The most important point I take from it is about priorities. The main priority of economics is to increase profit – it has no other goal than this. As Schumacher explains, the role of economic theory is only to predict and prescribe how much monetary value our possessions and labour are worth, and how we can maximise our monetary profit from those resources. So why is it given such power in our political dialogue? Schumacher says, ‘In the current vocabulary of condemnation there are few words as final and conclusive as the word ‘uneconomic’’ – if something is morally right but is thought to hinder the accumulation of money, it is seen as absurd and unrealistic, while things like the arms trade, benefit cuts, and tax havens are defended because they make economic sense. When we put economic concerns ahead of moral ones, our priorities become skewed dangerously towards profit and consumption, and away from what might be seen as more pressing concerns such as equality, justice, community and human flourishing.

Schumacher explains that this is a phenomenon of modern approaches to economics, but I would argue that there is precedent for his warnings over 2,000 years ago. Jesus claims in the sermon on the mount that we cannot serve both God and money. This is a question of priorities; if our main concern is with the accumulation of wealth, we will ignore our calling as Christians to address concerns of justice, peace and community. We all know the verse in 1 Timothy 6 that claims money is the root of all evil. But the two previous verses are more interesting to me: ‘…if we have food and clothing, we will be content with these. But those who want to be rich will fall into temptation and are trapped by many senseless and harmful desires that plunge people into ruin and destruction.’ Putting money above all else leads to bad outcomes, as we are constantly seeing in the wars and climate destruction around us. Being content with the few things we need is enough, and constantly striving for more money, more consumption, more growth, is senseless.

And so, Schumacher tells us we must get our priorities back in order. We must put our concern with money back in its proper place – as something we consider after we take into account our Christian values. This feels more relevant than ever as people are waking up to the pitfalls of capitalism, and realising that our systems are broken and corrupt. Money shouldn’t be made for money’s sake, but in order to serve those needs which need to be fulfilled for us to be content; it should be used to build a better world, rather than us sacrificing hopes of a better world at the altar of economics. So may we as Christians continue to speak up for values of peace, dignity, community, and justice, and to call out the senselessness of valuing profit over people.