Spotting the Signs of FGM (plus, how to take appropriate action) 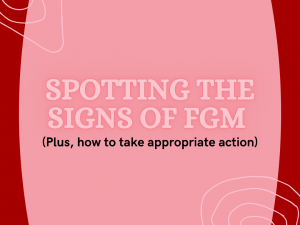 Since 2012 the UN has designated the 6th February as the International Day of Zero Tolerance to Female Genital Mutilation (FGM). The World Health Organisation, which is opposed to any type of FGM, defines the practice as ‘all procedures that involve partial or total removal of the external female genitalia or other injury to the female genital organs for non-medical reasons’ (i). There are no health benefits or medical reasons for FGM to take place. In fact, the practice often results in severe mental and physical trauma, including (but not limited to) excessive bleeding, infection, increased risk during childbirth and greater chance of stillbirth or early neonatal death (ii). There are also serious economic concerns associated with the practice, as the cost of treating FGM related health complications in countries where the practice is most prevalent is estimated to be $1.4 billion a year, with the cost predicted to rise to $2.3 billion by 2047 if things remain unchanged (iii).

Although women of any age may undergo FGM, it is most likely to occur between infancy and age fifteen. Currently, more than two million girls and women have experienced FGM, with a further 300 million at risk of experiencing it. Practising FGM is illegal in the UK and is considered a form of child abuse. Nevertheless, it still occurs. In England alone ‘one case of FGM is newly recorded every 92 minutes’ (iv). Part of the problem is that FGM is a largely hidden issue, it is carried out behind closed doors and those who undergo the procedure are often unaware that it is going to happen. However, this does not mean we should feel helpless, or unable to take action, because one of the best ways we can help to end FGM in the UK is to understand and spot the signs that it has or is about to occur and to take appropriate action.

The NHS describes how important it is to understand and recognise the background of girls who are most at risk of FGM. Those from communities at particular risk in the UK originate from the following countries (v):

According to the NSPCC, it is likely that someone from these (along with other) communities may be at immediate risk of experiencing FGM if (vi):

The NSPCC similarly lists the signs that a girl may have recently experienced FGM as being:

So what do you do if you think someone is in danger of, or has recently experienced, FGM?

If you think someone is in immediate danger then the best thing to do is to phone the police by dialling 999. If you think the danger is not as imminent, or you are not sure if you should be concerned or unsure of how to proceed then you can call the NSPCC’s free helpline on 0808 800 5000 or email fgmhelp@nspcc.org.uk.

Furthermore, if someone makes a disclosure to you about FGM, the NSPCC recommends that you (viii):

It is also important that those who have experienced FGM seek help from ‘a specialist NHS gynaecologist or FGM service’ix. Appropriate support can be recommended by a GP, midwife, or another healthcare professional. Those who have undergone FGM can also access support through The Dahlia Project (https://www.dahliaproject.org).  Besides being able to recognise the signs of FGM, there are other simple way we can support those who are at risk. The first is by simply being part of the conversation. As this video ‘Voices Over Silence: A Youth Call to Action on FGM’ from the Welsh Government shows, an important part of ending FGM is to be unafraid to have a public discussion about it.  Another simple action we can do to help address FGM is to pray for those who have experienced or are at risk of FGM. We can also pray for those working to end the practice both in the UK and abroad and for those supporting survivors of FGM – whether that be medical professionals, teachers, community leaders or others.

Finally, it is important that we remember that although FGM is largely a hidden problem in the UK, it is not an unbeatable problem. Together we can help to put an end to the practice of FGM.