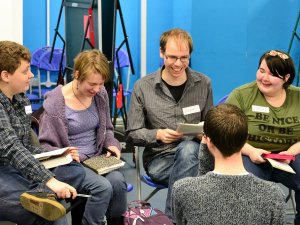 This term has seen some subtle changes to Cambridge MethSoc. We have been sharing several of our Friday evenings with the other local SCM group following the recent restart of SCM Cambridge in the city. It has been great getting to know everyone.

Our weekly Bible study this term has looked at the cultural context in the parables of Jesus and the concept of God’s omniscience as described by C. S. Lewis. Next term we will be spending some time looking at the Pilgrim’s Progress by John Bunyan.

On the Universal Day of Prayer for Students one of our members Sarah led the evening service at our local church, with the help of many of the SCM resources. It was a thought provoking day, as well as a time of strong fellowship for students young and old.

The future of the Methodist Society in Cambridge at the moment is uncertain. The national trend of decline permeates even to our generation it seems, but we are praying that our small university community can be inspiring and uplifting to as many as possible and may spring into new growth.

This term has been quite a packed one for MethSoc! We have been continuing to hold our weekly meeting with an increased membership, mixing social action, spending time socialising and worship. We have had curry nights, joint meetings with the University Atheist, Secularist and Humanist Society, and we also hosted the Real Junk Food Project.

Outside of our weekly meetings we have continued to run our Food Exchange Scheme, collecting left over food from campus on a Friday afternoon and passing it onto the homeless. We’ve also started a Sunday night Bible Study and have been increasing our work with CathSoc and AngSoc, holding a joint wine and cheese night and a board games night, which were a great success. We are looking forward to the summer term and everything it has in store!

This term has been an interesting and thought provoking one in Manchester as we have had the opportunity to explore our faith and learn more about social justice issues.

This term we held Eat, Pray, Act evenings where we ate together and learnt about different issues, from tax dodging to the effects of the palm oil industry. We considered how our shopping habits affect the animals and people in Indonesia and Malaysia.

In February we welcomed Symon Hill as our guest speaker, as he came to speak about his new book The Upside-Down Bible. We were challenged to look anew at some of the most well-known bible stories which led to some really interesting discussions.

In March we learnt more about the theology of St Francis as we welcomed the Franciscans of the First and Third orders into the chaplaincy to speak to us about what Francis had to say about the environment.

This blog post has been adapted and cross-posted from the upcoming issue of Movement magazine, no. 153, the Arts Issue. To get a termly copy of the magazine, become an SCM Friend today or to order your copy of the Arts issue, contact the office.

Tags:
SCM Connect
< Back to all blogs