Stand for election to General Council! 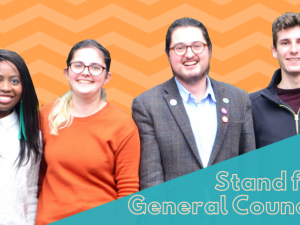 Are you passionate about the work of SCM? Do you want an opportunity to develop your skills? Stand for election to General Council!

As a student-led movement, the views of our members are at the heart of everything that we do. That's why General Council, the decision making body of the movement, is made up of students and recent graduates. At the Annual General Meeting in March, members will have the opportunity to elect new representatives to General Council. Could that be you?

What is General Council?

Being on General Council provides lots of opportunities to develop and learn new skills. You’ll learn about what's involved in running a small charity, how to work as part of a team and a whole host of practical skills like budgeting and project planning. Lots of training and support is provided, and you'll work closely with the staff team to shape the future of the movement.

Who can stand for election?

To stand for election to General Council you must:

SCM can make any reasonable adjustments to enable you to be part of General Council, such as ensuring that venues for meetings are accessible,  providing large print copies of meeting papers and facilitating involvement in meetings via Skype or telephone. If you have any access needs and wish to discuss these before you submit your nomination,  please feel free to contact the office.

How do I stand?

To nominate yourself for election, simply complete the nomination form(s) available to download below, and send it to the office no later than 12 noon on Friday 21st February.

Tags:
General Council
Students
Discipleship
< Back to all blogs