Stellenbosch: How Learning More About Bonhoeffer Changed My Life 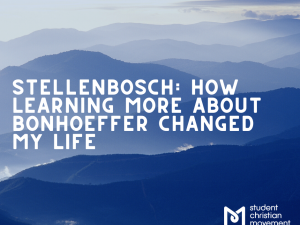 My name is George, I’m a Theology Youth & Community student at Nazarene Theological College in Didsbury, Manchester. Over the summer I won a bursary from Project Bonhoeffer to attend the Bonhoeffer conference 2020 in Stellenbosch, South Africa.

It was an absolutely amazing experience, and a blessing to be a delegate at the conference. Learning about Dietrich Bonhoeffer's theology in the South African, post-apartheid context was eye opening. Listening to the black South African pastors speak about their struggles and their belief in justice, especially for the next generation, convicted me. That they and their fellow activists were putting aside their dreams, careers, and aspirations so that future generations could live in equality was awe-inspiring. They fought for justice, peacefully, following the teachings of Jesus and they prevailed.

This conference changed me in many ways. It cemented my belief that Christians must fight for social justice for all marginalised peoples. I now know that no matter the context, Jesus is all, for all. I also learnt that I have to minister and act in justice every day. Bonhoeffer was indeed a revolutionary, ahead of his time, and a reference point that we can use when we look at the world and its troubles today. I aspire to study Bonhoeffer more and understand his works at a deeper level, which I believe will bear many fruit in my life and ministry.

The highlight of the conference came at the closing moments, during an emerging scholar panel. There was a young black South African who shared his story; when he was born he remained unnamed for three months. The reason being  because his father was jailed for protesting against the apartheid regime. Living out an indefinite prison sentence, when his father finally got word of his son's birth and knowing he was healthy he named him, in their South African dialect, “we are happy”. Later when this young man was able to question his father about his decision to name him this during a prison sentence, his father said that because he was born he and his fellow prisoners knew that the fight against the injustice of apartheid would continue. Because of this hope, he said “we are happy”.

And so, in the face of all the global crises; global warming, war, political unrest, the rise of white supremacy in Europe and America, poverty, viruses, fast fashion, injustices against immigrants, racism, homelessness, government and corporate surveillance and everything else that threatens humanity; we can still be happy, because the world is not without hope. It’s hope is the Church. You and me, but we must act in justice, in Christ.

I encourage all of you to get involved with SCM, and Project Bonhoeffer, as it has been a huge blessing in my life. I’m sure it will be for you as well. Thanks, God Bless!

Written by George Herrera-Fonseca. Jorge is a Theology Youth & Community student at Nazarene Theological College in Didsbury, Manchester and an SCM Member.

Tags:
Bonhoeffer
Faith in Action
< Back to all blogs