The Story of a Refugee 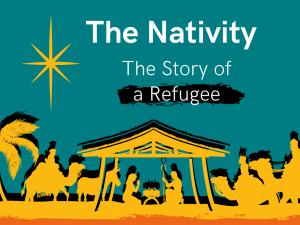 No room left at the inn

Every year schools across the country perform the Nativity: the story of a child, born of a virgin, in a stable surrounded by sheep and cattle, shepherds and wise men.

Understandably, the character often excluded from this child-friendly version of events is King Herod. After being informed by the wise men (the Magi) about a new-born king, Herod feared that he would one-day be overthrown by this young Messiah, King of the Jews. So, to protect his throne, he sanctioned the execution of all males, two years old and under, living in Bethlehem, Judea (Matthew 2). This event is known as the Massacre of the Innocents.

Though this event is not discussed anywhere else in either the Bible or verified historical documents, this does not mean that it didn’t happen. According to the independent recordings of Jewish historian, Josephus, Herod was a paranoid, jealous and dangerous ruler who ended the reign of the Hasmonean dynasty with the killing of all remaining male members. This, in turn, led him to execute his second wife, Mariamne I, three of his sons and multiple in-laws. He also murdered the unwitting Pharisees who prophesised that “his kingdom would not fall to his heirs”, a fate the Magi avoided (i). Herod was a killer. Unfortunately, the execution of a dozen baby boys in a small inconsequential city of around 1,000 people was neither out of character for Herod nor, arguably, noteworthy for historians. Additionally, high infant mortality rates coupled alongside archaeological and biblical evidence in Jeremiah 32:35 relating to the regularity of infanticide and filicide at the time (the purposeful killing of children or one’s own child) (ii) that the Massacre of the Innocents was not only plausible but unexceptional. With this in mind, it’s not surprising that Matthew’s gospel is the sole source that speaks of it. In fact, only does he choose to refer to the awful event in his gospel because it forced Jesus and his family to take refuge in Egypt.

According to Matthew’s Gospel…

Joseph received a message in his dreams from an angel of the Lord warning that Herod was about to sanction his son’s execution. The angel told him to take Mary and Jesus to Egypt where they must stay together until Herod’s death (Matthew 2:13-15).

It is from this moment that, according to Matthew’s Gospel, Jesus and his family became political refugees. Egypt had an extremely large Jewish population, meaning their sojourn was likely welcoming; nevertheless, Egypt was not their home but a haven. Following the rise of religious conflict in Egypt years after the family’s return to Israel, a letter written by Emperor Claudius in 41 C.E. states that the “Jews in Alexandria lived in “a city not their own”” (iii). Joseph, Mary and Jesus may have relied heavily on charity from Egyptian synagogues as poverty put them at risk of enslavement and ensuring religious prejudice may have been seeping noticeably into the country’s culture already. After returning to Israel following the death of Herod matters remained complicated for Christ and his family.

In chapter 2, Matthew states that after Joseph learnt that “Archelaus was ruling over Judea in place of his father Herod, he was afraid to go there” (Matthew 2:22). This is because shortly after Herod’s death Archelaus had 3,000 Jews massacred during a Passover gathering in Jerusalem (iv). Due to conflicts over Herod’s will, the 18-year-old was forced to share the land of Israel with his half-brother, Philip, and younger brother, Antipas (iv).

One area in which Archelaus ruled was Bethlehem, in Judea. Joseph knew that none of them could safely return to the districts under which Archelaus reigned without risking their lives and the life of their son. Antipas ruled over Galilee and Perea, which led the family of Christ to instead settle in Nazareth (iv) for this ruler had done nothing to concern them.

Archelaus’ tyrannical leadership gave him a bloody reputation. As a result of his behaviour, according to the historical writings of Josephus, twelve years after the birth of Christ Archelaus was banished to Europe and his title stripped by Emperor Caesar. This is significant because according to scripture it wasn’t until after his twelfth birthday that Mary and Joseph allowed Jesus to join them in Jerusalem for Passover (Luke 2:41-42).

While Jesus can be considered a refugee due to his family’s escape to Egypt, in many ways, an equally significant part of his early life and the story of the Nativity regards how he was treated when he returned to Israel. For many refugees, even if they can safely return to the countries of their birth, the issues that caused them to leave in the first place have not gone away. Jesus and his family became displaced people in a land far from the ancestral home they had hoped to return to (Matthew 2:22). Throughout Jesus’ life attitudes of anti-Semitism grew alongside the rise of the Roman Empire and scandal surrounding his birth was unlikely forgotten in his early years. He and his family represent the misunderstood, the unsettled and the innocent whose lives have been determined by the hatred and mistrust of others. People should not be made to feel unwelcome in their own homes. Nor should we – not only as Christians but as people – close our doors to others. “Do not neglect to show hospitality to strangers” for by doing so you may have “entertained angels without knowing it” (Hebrews 13:2). Assumptions about people should never be made off such trivial things as nationality, religion or race; for angels come in every form and speak every language but the one that visits you may not seem to share your nation home.

Belonging is not determined by race, religion or nationality, an understanding which Jesus carried throughout his life by living simply and displaced. He asked his disciples to “take nothing for your journey, no staff, nor bag, nor bread, nor money—not even an extra tunic” (Luke 9:3). His adult life was greatly determined by his early years and the events surrounding the often untold aspects of the Nativity story.

The foxes have their holes, and the swallows have their nests, but the son of man has no place to lay down (Luke 9:58; Matthew 8:20). From the moment he left Bethlehem, unable to return, Jesus became a man with no clear home. This is how he chose to live his life as a prophet, representing people from all walks of life and all lands on earth. Showing great passion for the equal treatment of ‘the stranger’, he proclaims to his disciples that “if any place will not welcome you and they refuse to hear you, as you leave, shake off the dust that is on your feet as a testimony against them” (Mark 6:11). While this sounds like a petty thing to do, it represents the disdain with which Jesus felt towards those unwelcoming of refugees or people in need. For he was a refugee himself and remains to be the stranger on our shorelines and lost in our towns.

Kindness is not complicated; “the whole law is summed up in a single commandment, “You shall love your neighbour as yourself.”” (Galatians 5:14). Thereby, this Christmas, in remembrance of the Nativity and the darkness of Christ’s early years that often goes unremembered, be kind to your neighbours and to the strangers unfamiliar to you. Be kind to yourself too and thank God for all the light and lovely people who still exist in this world.