A Theological Perspective on Remembrance and Awareness 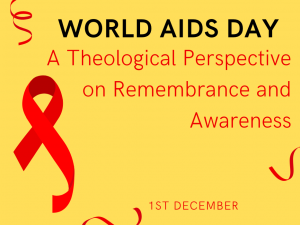 A Theological Perspective on Remembrance and Awareness

AIDS, known medically in the UK as Advanced HIV, refers to the stage in which a sufferer’s immune system has become so weakened by the virus HIV that they can no longer resist and recover from illnesses.

During the eighties, cases of Advanced HIV were at an all-time high; yet, treatment was still being perfected, tested and approved. For example, it wasn’t until the mid-eighties that sharing needles was even linked to the transmission of the virus. Hundreds of thousands of people contracted HIV (and Hepatitis C) through blood transfusions originally intended to improve their lives and the use of contraceptive protection as prevention was not fully respected despite the efforts of medical professionals and advertisers during the eighties and those such as Lisa “left eye” Lopes in the nineties.

How does scripture perceive the ill?

Tzaraat in Hebrew refers to disfigured skin and was used in the Bible as an umbrella term for multiple undiagnosed and unidentified medical conditions, including Leprosy.

During biblical times, little was known about Leprosy other than its method of transmission. This is evident in Leviticus, which states that a leper should “cover his upper lip” as the disease is thought to spread through respiratory droplets from the nose and mouth (Leviticus 13:45 NRSV). Everything else that people understood about the disease was based on what they saw on the outside of its sufferers: discoloured, dry and thickened skin, physical numbness, paralysis, blindness, nodules, painful ulcers and sores, facial abnormalities (particularly of the nose) as well as amputated limbs due to infection and disfigurement.

Symptoms of Advanced HIV include rapid weight loss, blotching and discolouration of the skin most noticeably around the mouth, nose and eyelids, white spots on the tongue, seizures, fatigue, loss of vision and neurological damage. There are distinct physical resemblances between sufferers of Leprosy and Advanced HIV. More recent medical research has also found that there is a slight correlation between HIV and Leprosy in regard to coinfection rates.

Described in the Bible as “unclean, unclean” (Leviticus 13:45), lepers were oft outcast to the outskirts of town to live in colonies (Leviticus 13:46; Isaiah 6:5) as people were fearful of contagion. Similar to the Bubonic Plague and, more recently, the AIDS crisis, a lack of knowledge and legitimate medical research about the disease caused many people to believe Leprosy to be a curse from God for sin. Today, those diagnosed with Leprosy continue to be ostracised by their communities and exiled to local colonies: Phud Hong in Thailand and Duttanagar in India are just two of thousands of informal leper colonies that still exist worldwide.

Reflect: How do you respond to people with physical illness or disability? Do you treat them differently, even without meaning to? Why do you think this is?

In the UK today over 100,000 people are known to have HIV and only 8% of sufferers are thought to be currently undiagnosed. Under 500 people a year die as a result of AIDS-related illnesses and this is usually the result of late diagnosis: heterosexual men are the most likely to be diagnosed late (just over 50% in 2019) despite being the largest group of people effected by the virus today.

T helper Cells are active in the function of the body’s immune system. The average healthy person (including someone with a diagnosis of HIV) has 500 to 1,600 T Cells per cubic millimetre of blood (cells/mm3). A diagnosis of Advanced HIV usually comes if this count drops below 200, which is exceptionally uncommon among medicated (and sometimes unmedicated) people. These cells serve as the diagnostic criteria for a person’s HIV infection status. As is suggested by its actual name, Advanced HIV is not a mutation of HIV or a separate virus entirely; it refers to a stage of diagnosis that most people in the UK today will never be given.

HIV does not kill, nor does Advanced HIV. However, the latter’s deteriorative nature leaves the body very vulnerable to often opportunistic collections of illnesses. Pneumonia is common and can be extremely dangerous among Advanced HIV sufferers, as is non-Hodgkin’s Lymphoma, Cardiovascular disease and other usually treatable conditions.

How did Christ treat the sick?

Instead he healed the sick and, not unlike the infamous photograph of Princess Diana shaking the hand of an AIDS patient (1991), Jesus “stretched out his hand and touched” the lepers who came to him for help (Matthew 8:3): “I am willing”, he said (Matthew 8). The “bruises and sores and bleeding wounds” that were never “drained, or bound up, or softened with oil” were healed by Christ (Isaiah 1:6) because a person’s sickness is not a curse nor their suffering earned by wrongdoing. No one should be forced by sickness nor social mistrust to feel unloved or unseen.

By helping those with Leprosy Jesus showed that God is not disgusted by people’s sicknesses. He proved, through his actions, that illness is not a punishment from above. Touching the arm of a sufferer of Leprosy or shaking the hand of someone with AIDS will not end your life. What it will do is begin to break down the barriers between you, the barriers created out of fear, which were made redundant years ago with the rise of research and medicine designed to protect us all.

Reflect: Put yourself in the shoes of someone living during biblical times. If you were watching Jesus help a leper, or someone clearly physically ill, how might you have responded?

Using protection, cleaning medical equipment and testing yourself regularly remains vitally important for stopping the spread of HIV because this virus is very much preventable. Those who are HIV positive should not be feared, nor should they be scared for themselves because with effective treatment (which is free on the NHS) they can live long, happy and healthy lives and, hopefully, feel confident in informing others about how to avoid spreading the virus.

This World AIDS Day, please Rock the Red Ribbon in both remembrance and awareness of HIV and Advanced HIV in the UK and worldwide. We encourage you to continue your own research about the virus and how it spreads, as well as be informed regarding how misconceptions shape stigmatisation and the speed of diagnosis today.

We pray for those who lost their lives so many years ago,

in years so filled with fear and doubt as cases continued to grow.

We also pray for those who still will lose their lives today,

As some believe that AIDS is gone but are wrong, to their dismay.

We must remember those who died in years of fear and dread,

To show them that we’re learning still we wear this ribbon, silken red.

Please, Lord God, give us the strength to understand its name,

And recognise that love can heal, not hate or fright or blame.

Take a watch of these short videos: