Is There Hope In The Current Political Climate? 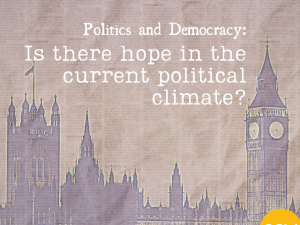 Our current political climate is dark. The government’s lack of urgency around the climate emergency has left many people fearful for the future. A lack of cross-party co-operation makes the possibility of a no-deal Brexit ever more likely, which could lead to a rise in the price of food, gas, and electricity, a scarcity of fresh fruit and vegetables, and shortages of essential medicines. Threats that unregistered EU citizens could be deported after Brexit leaves people’s futures uncertain. Vitriolic and inflammatory language used by MPs in Parliament has led to a sharp rise in hate crime, on top of hate crime rates already having more than doubled in the last five years. And with Brexit dominating our national discourse, there’s no room for discussion of other pressing issues: the record number of families turning to food banks; the failure of the universal credit system leaving vulnerable families without benefits for five weeks or more; the critical underfunding of the NHS leaving the future of our universal healthcare in doubt; and the continued effects of the government’s hostile environment and the Windrush scandal, to name but a few. In our current political crisis it is the most marginalised members of our society - the weak, the poor, the oppressed, the foreigners - who feel its effects the most. So is there reason to hope in our current political landscape?

In Exodus we read about a similarly politically divided nation. Over time, as the foreign Israelite population in Egypt increased, they became the object of suspicion, blamed for the problems in society, and perceived as a threat. A new regime brought with it oppressive policies against them, including the use of forced labour to support public projects, and even infanticide. In their desperation, the Israelites “cried out to God” and “God heard their groaning…and took notice of them.” (Exodus 2:23-25) Our cries of desperation, exasperation, and frustration are heard by God, and we can trust and hope in God’s faithfulness and love for us. But we cannot simply rely on hope alone. Hope without action is futile, and as Christians we are called to defend the defenceless in society. In Exodus 1, the Hebrew midwives are told to kill all newborn boys, but they defy the king in what some scholars describe as the first example of civil disobedience in world literature. These women, who held marginal social status, stood up to power in order to protect the vulnerable. One of these saved children, Moses, would eventually free the Israelites from their captivity, all because these women chose to take action to defend the weak, rather than resting on hope alone.

The German pastor and theologian Dietrich Bonhoeffer passionately believed that Christians should take action against injustices in society. Watching the rise of Hitler and the Nazi state, he felt that the church had a moral obligation to speak out and protect those who had their rights taken away. However, there was little in terms of open opposition to Nazi policy. Bonhoeffer criticised this silence, saying that “the church is the church only when it is for others” and that “civil courage depends on a God who demands responsible action in a bold venture of faith.”

Hope without action is futile. Prayer that becomes “bold ventures of faith” is empowering and formidable. We should thank God for those from climate action groups who put their freedom on the line to campaign for climate justice, and the many courageous young people like Greta Thunberg who sacrifice their education to stand up to power. Their hope that society can and should do better and be more just is so strong that it has moved them beyond hope into tangible and visceral action.

There is hope in our political climate, but we must embrace it and use it to fight for change. Instead of waiting for someone else to change society, we have to step-up and fight for the changes we want to see. Use hope to motivate you to take action - don’t just rely on it as a way to get through this political crisis.

Josh Mock is a BA Arabic and Persian Student at SOAS, University of London. He writes about faith on his blog Queer Gospel.

Tags:
Politics
Bonhoeffer
< Back to all blogs