Thoughts that resonate (Diversity with division) 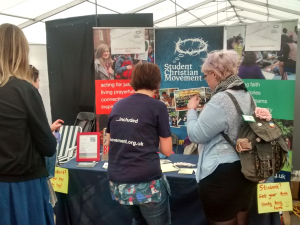 Sometimes I date myself. That might sound slightly pathetic, but I thoroughly advocate it; spending quality time doing something exclusively for you is a beautiful thing. Sometimes I play games on my own, other times I text myself if something has stayed with me.

Generally the things I stumble across that really resonate with me are the things that I want to reflect on later.

For example, during a talk given by Brian McLaren at Greenbelt festival this year, I was struck by something he said (in reference to the trinity): “diversity that doesn’t lead to division.”

This really hit home with me when reflecting on my time at university trying to work with other Christian societies and the conversations that followed. Conversations that began as sharing what made us distinctive easily escalated to arguments about differences as opposed to the appreciation of diversity, which is usually the beginning intent. (Heads up: this blog contains more questions than answers)

Contrast that to the SCM summer school, with its morning worship times in different styles that all felt radically different, without ever really causing controversy. It’s ecumenical: learning from other traditions.

Or even Student Cross (the Catholic pilgrimage I’ve walked the last two years) where we clearly have a lot of differences, but I love the reflective time it gives and the space to experience things totally differently to what I’m accustomed to. I have learnt so much from those experiences.

Bringing it back to what Brian McLaren was saying, he was talking about the trinity and the diversity there, and trying to learn from that.

But how do we take that and apply it to our daily lives and relationships?

Probably with difficulty and love.