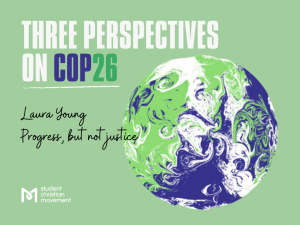 Progress, but not Justice

The UN climate talks have taken some steps forward, but fallen short of justice for the most vulnerable.

Last month, the world’s eyes were on Glasgow as the much-anticipated climate talks unfolded. I was there. There for the whole two weeks, inside what was called the ‘blue zone’. This zone was where everything official was happening. Meandering around the conference were United Nations officials, delegates from around the world, journalists, business representatives, politicians, and me with some of my Tearfund colleagues. We were there in the heart of the action, observing everything unfolding and closely monitoring the progress we were hopefully making. While inside we campaigned, reported back, created social media content, wrote emails, appeared in the media, and most importantly - prayed.
As the talks drew to a close – having overrun as leaders struggled to reach agreement – we now know that this fortnight brought some progress, but not yet justice, for the most vulnerable nations on the key issues of limiting global heating to 1.5°C and providing financial support for those hardest hit by the climate crisis.

Moving the dial on temperature rise

Before the conference began the weight of climate reality was heavy. We came in on a trajectory towards a devastating 2.7°C of global warming if nothing changed, and called for world leaders to align with the science for the safer level and agreed target of 1.5°C. We now know that new climate pledges have shifted the dial slightly, putting us on a trajectory for 2.4°C. This still isn’t enough, and it still won’t bring the climate justice we need.

Promises were made throughout COP26, including pledges to end and reverse deforestation, reduce methane emissions, consign coal to history, and further the movement away from new fossil fuel investment from richer nations, switching to support better clean energy projects. All of these pledges were good, and much more than we had before. Each and every one of these needs a moment to pause and celebrate the progress which has been made, but we know all of these together don’t get us to where we need to be, and require more campaigning moving forward to build on this foundation.

But right now these are just words. And while many of these help limit the worst effects of the climate crisis, every fraction of a degree matters to people on the frontline. For millions of vulnerable people, it could mean the difference between life and death. Nations have been asked to return next year - to COP27 in Egypt - with stronger plans, and we must do everything we can to hold the leaders of high-emitting nations to account for delivering these plans and targets for rapid, deep and sustained emissions cuts in line with 1.5°C.

A big part of this conference was the need to close the gap, foot the bill, and pay up for the damage done to climate-vulnerable countries, particularly from richer and higher emitting countries. Perhaps one of the most disappointing parts of this conference was the wealthy nations falling far short of the financial commitments they made over ten years ago. They failed to commit to anywhere near the level of new financial support needed, and failed to meet the long-overdue commitments, such as the $100 billion per year promised back in 2009. Climate finance is something we must continue to pray for, and hold our leaders accountable for in the next year.

One of the most impactful moments for me personally was the opportunity to meet with Nicola Sturgeon, the First Minister of Scotland. Her role at COP26 might have been on the sidelines as a non-party state leader, but her influence is strong among the other nations, and on the global stage.

On the loss and damage day myself and Global South Christian faith leaders from Bangladesh, Fiji, Malawi, Nigeria, Panama and Zambia, met with the First Minister and took the opportunity to share personal experiences of climate change – where droughts, flooding and other erratic weather conditions have caused repeated chaos and continue to devastate lives and livelihoods. The reality is those who have done the least to cause the climate crisis, are the most impacted by it and rich nations do have to make good on the promises they have made.

It was during this meeting that Nicola Sturgeon expressed her concern for climate change, and emphasised her commitment to ensuring that richer nations foot the bill when it comes to climate finance. She even went as far to say that this money was “the debt we owe to you” for the decades of harm richer countries have done to the planet. We know that after this meeting, and others that week, Scotland became the first developed nation to commit finance for loss and damage.

From coal to climate activism

A big part of this conference for me was coal. Consigning coal to history was a phrase thrown around a lot, and it made me do a lot of reflecting on my family history. My Great Great Grandfather, James Jack, worked in the coal mines of Scotland 100 years ago. Not only did he work in the mines, he also helped pioneer the industry with the coal cutting machine. This machine led to a revolution in coal production across the world, and significantly advanced the industrial revolution. My family comes from coal, with a line of men working as miners throughout the late 19th and first part of the 20th centuries. There is something powerful in thinking about my family roots, and now looking forward to the climate activism I am doing. I was at COP26, where coal was consigned to history. When I spoke on energy day about consigning coal to the history books, in those books are my family.

It brought home the reality of when we talk about the need for a just transition there are people at the heart of this. People currently working in the fossil fuel industry, and countries needing to move across to cleaner and greener forms of energy. I am brought back to James Jack, understanding that if 100 years ago we were thinking about the transition away from fossil fuels, it would be his job on the line. We need to honour the sacrifice many made in this job to get us to where we are today, but also provide the finance needed for countries around the world to skip the damaging step of relying on fossil fuels and move to cleaner and greener energy for all.

Image: Laura Young; James Jack in the coal mines of Scotland over 100 years ago.

Christians speaking up for change

While the talks themselves have fallen short on many issues, COP26 has been about far more than just the negotiations. It’s been about movements of people coming together to create change. We have seen more people speak up for climate justice than ever before, with Christians all over the world rising up and playing their part.

On Saturday 6 November, thousands of people took to the streets of Glasgow and other cities across the world – as part of the COP26 Day of Action – to raise their voices. In these crowds were thousands of Christans. One of the most profound moments for me throughout the entire two weeks was seeing a sea of yellow love heart placards march across the streets of Glasgow as Tearfund gathered people from across the UK to walk and pray together. With messages such as ‘Love our global neighbours’, ‘1.5 saves lives’, and ‘Act justly, love mercy, walk humbly - Micah 6:8’ spreading a message of hope.

But what we know is that speaking up, and advocating for what we care about, looks different for every person. While people were marching, chanting, and making placards, there were many others playing their part in unique ways for them. For the last year one of my main focuses has been on creating a COP26 church service to host in churches across the UK. From a simple idea of wanting the middle Sunday in COP26 to be covered in prayer, through to the final resource which thousands of churches used on November 7th, it was incredible to witness the movement of Christians who paused to think and pray about the climate. Pete Greig, Carol Ng’ang’a, and Celtic Worship brought a message of climate change for thousands to hear, no matter where they were in the world. For many, this was the first time they had heard climate issues being addressed from their church.