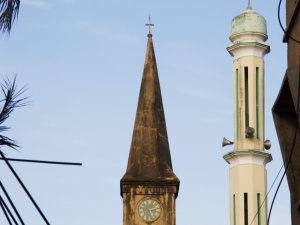 Some politicians (Nicky Morgan, David Cameron and Nigel Farage, to name three) have been insisting in recent years that the UK is a ‘Christian country’ and that it is important to keep it that way! I believe Christians must passionately reject this notion for three important- and Christian- reasons.

1. Exclusion is NOT a Christian value

The first reason is that by saying one religion is the ‘religion of this country’ you are effectively saying that people of other religions are not ‘of this country’ and therefore don’t belong. Non-Christians are therefore considered as outsiders: excluded and rejected, never really a part of Team UK (see number 3 for more on why this is a very dangerous idea). A similar kind of exclusionary logic leads to the rejection and dehumanisation of refugees as well: if you are not a Citizen of the UK or some other country, you are a ‘Citizen of nowhere’, according to our current Prime Minister, Theresa May. But she doesn’t seem to understand that this immediately excludes refugees and other State-less people, and leads to no-one in the world taking responsibility for them, as they are not ‘our citizens’.

Excluding refugees and people of minority faiths is definitely not a Christian value. Firstly, we need to remember that Jesus himself wasn’t Christian and didn’t set out to create a religion called ‘Christianity’. His purpose was to show a new way to live, and that way was open to anyone, regardless of faith. He showed those on the margins the most love, and he himself was a refugee. Also, although he was a Jew himself, he went out of his way to meet with and speak to Samaritans, Romans and others. In the story of the Samaritan woman in John’s Gospel (John 4.1-42), Jesus seems to literally go out of way to meet with Samaritans, as he makes the choice (which very few Jews would have made at the time) to go through Samaria rather than round the edges, which would have been the usual way of avoiding contact with these culturally un-clean people.

2. Christian imperialism is NOT a good thing

Some people seem to be strangely nostalgic about Christendom in the same way that some people are bizarrely nostalgic about the British Empire. However, we should not be nostalgic or feel good about either: both were oppressive and coercive, never mind about extremely violent at times, and both advanced an idea of superiority of one religion/nation over other religions/nations which would have made Jesus squirm. Our country has laws to protect people of all religions, and it is important that we do not become a theocratic nation. A nation which is 'Christian' or 'Muslim' or 'Jewish' or 'Sunni Muslim' has a tendency to want to reduce religious freedom of expression for other faiths.

Jesus’ kingdom crosses over nations and even over religions. Jesus’ life shows us that he was not only suspicious of the Nation State and of over-dominant religion, but also believed that all people could and should worship God ‘in spirit and truth’ (John 4.24), not through a particular doctrine or ritual. In the words of St Paul, Jesus’ new way calls us to be ‘neither Jew nor Gentile [nor Christian]’ (Gal.3.28) but beyond all of these!

3. We need to talk about the Far Right

The way that the English Defence League and other far-right groups in the UK use the Christian faith to promote their extremist views should be of concern to all Christians and all people of faith. Much is said about the rise of 'Islamist' extremism, even though so-called ‘Muslim’ terrorists are far from Muslim, according to the adherents of that faith themselves. However, 'Christian' fascism has existed for a very long time and is on the rise again in the UK: nearly a third of the terror referrals passed on to police now relate to right-wing extremism, for example.

We need to be very careful when we make extremism and violence about one religion only. After the attacks on Borough Market and Manchester, Theresa May came out and said ‘enough is enough’: we have become too ‘tolerant’ of ‘Islamist extremism’. I’m not sure who she thinks is ‘tolerant’ of these heinous acts or the violent ideology they spring out of, but the issue with her using words like ‘Islamist’ is that it only encourages the growth of far-right extremism and leads to more Islamophobic hate crimes and even the far-right’s own terror attacks, as seen outside Finsbury Mosque soon after the other two attacks.

It’s important for the country and the country’s leaders to get to the bottom of why people – whether ‘Christian’ or ‘Muslim’ – reach the point where they can do something so evil to other human beings, and tackle not only terrorism but also its causes. It is also equally important that we do not start pointing the finger at adherents of one religion, thereby excluding the peaceful Muslims in this country even more, and making the Christians feel even more superior. Jesus would certainly not have approved of anything less than the nurturing of friendship, understanding and love between Muslims and Christians.

Ruth Wilde is the Faith in Action Project Worker for SCM. She strives to be a Christian without borders and is a proud Citizen of the World. Ruth is running a workshop this year on the importance of 'Disagreeing Well' across divides and difference. See here for more.

Tags:
Christianity
Inclusion
Jesus
< Back to all blogs