Through the eyes of Barth: The Bible as divine revelation 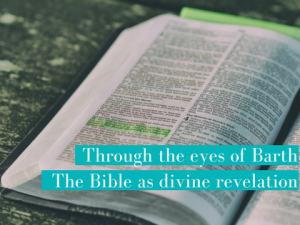 Last year a friend of mine said to me “I’m surprised you believe in the big bang theory and evolution.” I, of course, had to ask why. “Well, you’re a bit of a biblical fundamentalist; if it’s not in the bible, you don’t believe in it.” On one level, my friend wasn’t wrong. When it comes to theology, if it’s not in the bible, I don’t believe it. But this “hard core” view is one that I was led to because of my study of theology, and not, as it can often seem to theological liberals, despite of it. It all started when I first began to study the work of that most infamous of 20th Century theologians, Karl Barth. In a defence of his views of revelation in a 1967 interview, Barth states rather startlingly “What one could possibly call revelation, beyond the Bible…this could now be something along the lines of Hitler, right?”

I’ll apologise now for falling into the trap of Godwin’s Law in the first paragraph of this post, but, and I hope you’ll see why, I had to. Barth was a man directly involved in the struggle against National Socialism. Forced out of his University seat at Bonn, it was he who chiefly drafted the Barmen declaration, the confession of the Confessing Church which stood against the National Socialist intervention in the church. Unequivocally it declares “We reject the false doctrine, as though the church could and would have to acknowledge as a source of its proclamation, apart from and besides the one Word of God, still other events and powers, figures and truths, as God’s revelation.”

If this complete rejection of anything but the Word of God revealed in Scripture sounds extreme to us now, it might be comforting to know that this was also how most of Protestant Europe viewed it. Discussing the declaration at the convocation of Bishops on the 7 June 1934, the episcopacy of the Church of England decided to support “the spirit of the declaration”, but were quite clear that they did not wish to endorse its theology. For the rest of the 1930s Barth however repeatedly insisted when asked how non-German Christians could support the Confessing Church, that the only way to do so was to reject natural theology and affirm that the Word of God, the person of Christ Jesus, was solely revealed in Scripture.

Eighty years on, I find myself studying this material. Some I have shown this material too easily write it off as a strong reaction to the horrors of a particular time. Nazism, with its unique evil, produced unique responses. I, however, find I cannot do this. When I first began studying Barth and the Church in the 1930s, I was a very proud Anglo-Catholic. I believed that the truth of Christianity was revealed by the tradition of the Church, Scripture and reason. Now a few years later, still with a love of some bells and smells, I find this is a stool I cannot sit on. Barth knew first-hand what it meant to fight fascism, he also knew that the lines between fascism and established Churches could be far too murky than many of us are comfortable with. With the rise of the far-right and fascism across the Western World, sped into power in the United States by the help of a religious right that sees in a sexual predator some sort of divine revelation, the voices of the 1930s cry out to us.

Perhaps, if we were different people, not so marred by sin, we would hear God all around us, but we are not. We are the people who too easily see power, or fame, or wealth and make them the Golden Calf to call our God. We are the people who can sit in Churches where ministers will tell us that it is God at work through the White-Supremacy of the White House, or in the dirty business of our own Parliamentary Democracy, or give divine sanction to the horrors of neo-liberalism and “compromise” Capitalism. And, as long as we are those people, the only place we will truly know God is in the sole place unaffected by us, our lives and our desires. We will know Him in His Son, revealed in Scripture.

Written by SCM member Dan Cruickshank. Book your place at A Light For All on the 18th November to explore the Bible with other SCM folk in Lancaster.

Tags:
The Bible
SCM events
< Back to all blogs