Till Death Us Do Part: On The Sacrament of Marriage 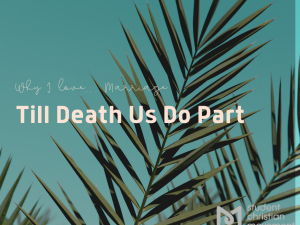 As my friends, family, and colleagues are probably sick of hearing, I’m in the middle of planning a wedding. My fiancé and I got engaged over the summer and so the past few months have consisted of fielding questions from interested parties, working out a budget, going to wedding fairs, and generally trying not to go mad in the process.

This has inevitably led to me having some thoughts on marriage as a sacrament, but also on the specific industry that is the wedding day alone.

Firstly, I would like to say that the wedding industry is an all-consuming behemoth that will try to convince you that you need to buy napkins in a specific shade of turquoise or your wedding will be doomed. Secondly, it seems to me that in its own interests the wedding industry has fetishized having ‘the perfect day’ to the neglect of the actual marriage that comes after the wedding. There is so much emphasis on everything being ‘a spectacular event’; a ‘wonderful’ occasion for your friends; and a day that will ‘entertain’ everyone there. Unsurprisingly this often comes at enormous cost and stress.

But really, is this the point of a wedding? When we step back and look at marriage as a sacrament we realise that a wedding is not a theatrical performance but an occasion that marks a fundamental change in people’s lives. The Scottish Episcopal Church has a lovely part in the marriage liturgy that reads

‘Through the ages, people on great journeys have stopped at important places, and at decisive moments, to build cairns at the roadside to which they and others can always return.’

Think about the other sacraments. They can be beautiful, moving, happy, holy. But they are not an end in and of themselves. We are baptized so that we can go into the world as light and salt. We take the Eucharist to be reminded of the certainty of Christ’s love. We confess because we need to know that we are forgiven and held by God. These are the great events of life. They are the touching points where heaven meets earth – the cairns that we can return to, again and again.

What about a wedding? Certainly it is likely to only happen to you once in a lifetime (or at least that is the intention when embarking on a marriage). Certainly, it is a momentous occasion, but it too is a jumping off point. Just as in a baptism we are marked as changed forever, so the wedding is an occasion to mark the change that occurs when two people decide to embark on a marriage. Just as it would be ridiculous to assert that the baptism is the high point of a Christian’s faith journey, so it would be ridiculous to consider the wedding the high point or culmination of a relationship. Whilst weddings are being sold to us as an end in itself, a marriage is just the beginning of a lifetime of journeying together.

And this bring me to my last point. Over the past decade there has been a lot of progress on equal marriage, with more and more denominations electing to marry two people of the same gender. The joy at the success of these campaigns is balanced by the awareness that there are still many denominations, churches, and Christians who do not recognize equal marriage as legitimate.

What do sacraments have to do with this? Well, on both sides of this issue are those who argue that all the Church has done recently is have arguments about LGBTQ+ people; whether they can be married; whether they can have sex; whether they can be considered Christians at all. Frankly, it is exhausting to have these conversations over and over again because in my own view marriage is a sacrament, and we should not deny this sacrament to anyone who enters it willingly.

You might argue that sacraments are only symbolic, and the performance of them is about acknowledging an ontological change that has already occurred. There are others that believe that the sacrament itself is the instigator of the ontological change. I don’t find such binary thinking helpful, but what I do know is that a sacrament is something of inherent value and significance – something at once very simple, but also very important. So, cutting through the various arguments surrounding equal marriage is the question we must ask: ‘why are these people alone singled out as not being worthy of this sacrament?’

Thankfully my own big gay wedding will be taking place in a church where thousands of other couples have stood before me. I hope that on the day itself I will remember those who have committed themselves to marriage in the very spot that I will stand in. I hope that we will be blessed by this sacrament, and that we can contribute to the cairn of stones that we and others can return to, again and again.

If you would like to support the Campaign for Equal Marriage in the Church of England, you can do so here: https://www.cofe-equal-marriage.org.uk/

All May, None Must, Some Should: a Methodist View of Confession
The Healing Powers of Anointing of the Sick: A Roman Catholic Perspective