Too Much, Too Young? A Christian Response to the UK’s Recruitment of Child Soldiers 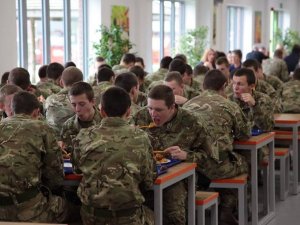 Child Soldiers in the UK?

Recently an article by the moral and political philosopher Dr Jonathan Parry caused a bit of a stir online. One commenter went as far as to suggest that Dr Parry, “should not be allowed to lecture at Birmingham University or any other institution”. The article received such negative responses because it dared to criticise the military, and specifically its recruitment of 16 and 17-year-olds. The article even calls such recruits ‘child soldiers’.

We may be more accustomed to hearing this term in relation to armed groups in the global south, but the recruitment of children to armed forces around the world is not a ‘normal’ practice. In fact, the United Kingdom is the only permanent member of the United Nations Security Council, the only member state of the EU, and the only NATO member country which still persists with the recruitment of children. It has been criticised by international bodies such as the UN Committee on the Rights of the Child for this.

Despite officially not being able to see active conflict before the age of 18, children who join the armed forces at the age of 16 are twice as likely to be killed or physically injured than those people who join as adults. In addition, children who join the army are expected to be at an education standard equivalent to an Entry Level 2 qualification (a reading age of 9 to 11), and then proceed to achieve a Level 1 qualification (a D-G grade at GCSE) within three years of enlisting. However, some child soldiers have been assessed to be at Entry Level 1 standard after joining (a reading age of 5 to 7). It is highly likely that many of those who sign such documents at the age of 16 are not truly able to understand what they are signing.

In 2010, Capt. Laurence Roche said that, “20 per cent of each intake arrive without any formal qualifications, but, out of those, 50 per cent leave with an NVQ at Level 2.” This is woefully short of the 5 GCSEs at grades A*-C that are the basic measure of attainment for most schools. As a child, I attended a special school for children with dyslexia and I'm glad I did, as it enabled me to go from a stage of struggling to read at all to scraping a C grade at GCSE in English in about 5 years. I was able to access A Levels and, eventually, university. A fair amount of my classmates did not manage to get C grades and were thus denied the opportunity to study academically any further. Part of me thinks that the army targets schools like mine. The army paid us a lot of attention: I remember a climbing wall being set up by them at some point as well as them organising other types of sport; I also remember being bussed to Aldershot to have (considerably airbrushed) aspects of army life demonstrated to my class.

Supporters of the recruitment of children may well say that the army provides a service to society in offering children who cannot attain basic academic qualifications an early start at a career. It is true that we would struggle to name a career that is as well-respected as serving in the military which one can access without GCSEs. It is a sad fact that, as long as you’re prepared to kill someone or get shot at and potentially die in a dusty ditch in some forgotten part of the Middle East, no-one will care what your reading age is.

Are we as a society OK with this being the only option for young school leavers? Surely, if we can throw money at training people to be in the army, we could instead use that money to train them in some other career? It also assumes that a job in the military is indeed respected. It’s certainly respected when politicians want it to be. Armed Forces Day, Remembrance Day and Remembrance Sunday are all opportunities for the ruling class to give us a dose of patriotism while conveniently forgetting to mention that veterans make up to one tenth of the homeless population. I wonder if the veterans who find themselves sleeping on a cardboard box in the cold tonight are happily looking forward to the next such national occasion to be reminded once again how respected they are?

Victims of an economic system

No matter how much we are told to call them heroes, Britain’s child soldiers are, in reality, victims of a capitalist economic system in which it is simply more profitable for people with a low level of education to be trained to kill and be killed rather than to be helped into long-term careers which could help create a peaceful society. Herbert McCabe OP once explained:

“Capitalism is simply … based on human antagonism, and it is here precisely that it comes into conflict with Christianity. Capitalism is a state of war, but not just a state of war between equivalent forces; it involves a war between those who believe in and prosecute war as a way of life, as an economy, and those who do not […] Christianity is deeply subversive of Capitalism precisely because it announces the improbable possibility that men might live together without war; neither by domination nor by antagonism but by unity in love.” [The Class Struggle and Christian Love, Herbert McCabe].

Dr Parry makes an important point towards the end of his article that there is “nothing morally special about war.” To this I would like to add that there is nothing morally special about Capitalism, and we should reject the notion that the use of force by capitalist nations is always “legitimate”. The case of child soldiers in Britain is yet another reason why we cannot trust the State with its monopoly on morally-acceptable violence.

What you can do:

This is not an easy road to take, but then neither was the path that Jesus walked. We too should be prepared to walk the more difficult path for peace.

Robin is an SCM General Council member and member of SCM Leeds. He recently finished a Masters in Theology at the University of Leeds.

* Groups like Forces Watch, Veterans for Peace, the Fellowship of Reconciliation and the Peace Pledge Union.

Tags:
Peace
Education
< Back to all blogs