United in Christ: Ecumenism and the World Church 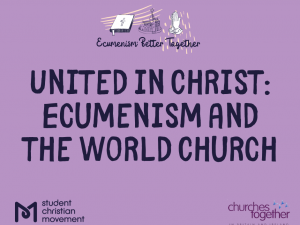 The Week of Prayer for Christian Unity (18 – 25 January) is an international initiative aimed at fostering mutual respect and collaboration between the many different denominations that make up the world church. It is a great example of ecumenism in action.

Ecumenism is a concept derived from ‘oikoumenē’, which is Greek for ‘the inhabited earth’; in other words, humanity. The universal nature of ecumenism means that the variety of groups involved in ecumenical initiatives is vast. The World Council of Churches, a leading international ecumenical network, lists 349 different national church bodies as members. From Assyrian and Anglican to Mennonite and Methodist, the WCC’s membership list gives us an idea of just how many types of Christianity exist in the world today.

As a Methodist who works for an Anglican organisation, I am a big fan of ecumenism. I have previously written for SCM about the particular relationship between these two denominations. Yet, within the extended family of the world church, Methodism and Anglicanism are pretty close relatives! Bigger differences emerge when I encounter the doctrine of the Catholic Church or some of the more literal readings of Scripture found in smaller, evangelical denominations. However, I believe that churches of all stripes should work together to give people the appropriate tools they need to explore faith. The Week of Prayer for Christian Unity encourages us to reflect on our similarities and differences, the state of current ecumenical relationships and how they can be improved, and overall, why we believe what we believe.

One of my favourite things about the Anglican Communion is that almost every province is unique in how they conduct worship, how they see their own identity and how they relate to each other. The Church of North India (CNI) is just one example of distinct church identity. In 1970, the CNI was formed from Baptist, Anglican and Methodist churches. Within the church leadership, they have moderators and bishops, as a result of a very mixed church polity, and practise diverse expressions of worship.

The Iglesia Filipina Independiente (IFI) is also quite different from your ‘typical’ Anglican church. Formed by a Catholic priest in 1902, the Church now promotes progressive values while using both Catholic and Anglican liturgy in the Eucharist. The IFI is a nationalist Church, incorporating the use of national colours and motifs, as well as the singing of the national anthem and the displaying of the Philippine Flag during church services. While these expressions may jar with Western beliefs about the separation of church and state, the IFI is a proudly anti-imperialist denomination secure in their identity as a national church.

These two examples show how diverse the Anglican Communion is. Yet, this is just a small insight into the wonderfully varied nature of the world church – Anglicanism is just one of many denominations after all! While the Week of Prayer for Christian Unity encourages Christians around the world to pray for each other, I would personally encourage everyone to both pray for fellow believers across the world and take some time to research different expressions of Christianity. Although you may not agree with everything you read, it is vitally important that we get to know our siblings in Christ better, wherever they may be in the world.

Written by Nathan Olsen. Nathan Olsen is a former Editor of Movement Magazine and long-time supporter of SCM. He currently works as a copywriter for USPG, the Anglican mission agency.

Between the Back Door of the Bungalow and the Garden Gate: A Vocation Story
Ten Times the UK Welcomed the Stranger (and the Positive Impact They Had)
Proud to Be... A Fighter