Vocation: a Summons to Live and Love 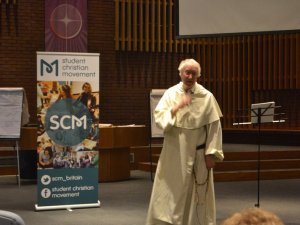 “What am I do to with my life?” This question is one that has agonised many a young (and not-so-young) person throughout the millenia of human civilisation, especially in times and personal circumstances where a significant degree of freedom in choosing how to live one's life is present.

At the recent SCM gathering in Manchester, where the theme for the weekend was “Called to be...”, Fr Timothy Radcliffe OP delivered the keynote talk addressing this question through examining the concept of vocation. Fr Timothy is a Dominican friar, theologian and author of thought-provoking books such as What is the Point of Being a Christian? and Why Go to Church?

Today many understand the word vocation as referring to a sphere of (generally paid) work which one feels called to, such as carpentry, politics, teaching or some form of religious ministry. Fr Timothy, however, began by defining vocation not as one's primary occupation, but rather a summons to live. He pointed out that in Deuteronomy, the people of Israel are urged by God to “choose life,” and Jesus himself said that he came that we might have life to the full. In other words, both the Old and New Testaments ask us to consider what it is for human beings to flourish.

However, the understanding of human flourishing in the Christian faith is very different from that of our contemporary culture. The latter assumes that a good life is about fulfilling one's maximum potential, but Christianity is about going beyond human nature. The Christian is called to do things which are impossible for us without the grace of God, such as loving unconditionally. If the American Dream says, “You can be anything you want,” the Christian way says, “With God's help, we can be more than we can imagine.” For as St Paul puts it, it is no longer we who live, but Christ who lives in us.

Lest we be tempted to think that this is primarily about God helping us attain bigger and better achievements according to the logic of the world, such as more money, power or fame, Fr Timothy argued that the Christian tradition tells us that life is about doing seemingly mad things. He quoted Herbert McCabe, another Dominican, who said that if we love, we will get hurt, and maybe even killed; however, if we do not love, we are already dead. As an example of such a commitment to this path, Fr Timothy gave the example of the Trappist monks who refused to abandon their Muslim neighbours during the Algerian Civil War, which led to them being kidnapped and murdered. Their moving story is told in the critically-acclaimed film Of Gods and Men.

Every perilous adventure begins with love, a fact we know from stories of romance. Yet, we are ultimately called to fall in love with Love Itself, that is, God. The real question is: how will one love? Dorothy Day, co-founder of the Catholic Worker Movement, once wrote, “You will know your vocation by the joy that it brings you. You will know. You will know when it's right.”

You might be thinking, “This is all well and good, but how do we actually go about finding this joy?” Fr Timothy suggested that listening to God is paramount, and for that we need to cultivate a deep silence through disciplines which help us to be still in the presence of God. If we do this, we will find that it is less about God “saying something” to us, but rather him speaking us into being. And with that profound thought, the tall, friendly figure in a white habit ended his address.

Soo Tian is a research student at Birkbeck College, University of London and Parish Assistant in the parish of Cowley St John, Oxford.

Tags:
Vocation
Students
< Back to all blogs