Waiting in Hope: A Look Back at the National Gathering 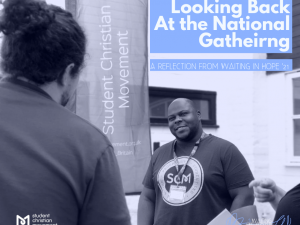 Two weeks ago (and three months later than originally scheduled), 25 students and SCM staff arrived in Ledbury to reflect on the theme of Waiting in Hope through talks, worship and Lego.

From the moment of my arrival, it was clear we would be having a good time together. Many of the attendees had already arrived, and were playing games outside. This spirit of fun and community continued throughout the weekend, with people playing sports and chatting outside between sessions and in the evenings.

So what does it mean to wait in hope? In his morning keynote talk, Augustine Tanner-Ihm discussed the hope in Ezekiel 37, containing the story of the Valley of the Dry Bones. God says to the dry bones – which represent His people – “I will make breath enter you, and you will come to life.” Augustine shared various anecdotes from his life, taking us through the different attributes that are necessary in hope: trust in God, courage to do what is right and follow God’s call, determination, strength, and endurance. The last in particular stood out to me. He spoke about a difficult job working in the school he had recently attended as a pupil, and choosing to endure there despite his struggle. And some time after he left, he received an email from one of his more difficult pupils, thanking him for all the support he’d given. This pupil had successfully found a university place, even though Augustine could not tell at the time that he was making this impact – his endurance in that job had been vital to this child. He ended with a call to action. First, SCM has a great legacy of being at the forefront of social movements for justice, and we should hope to continue that. Second, we should learn to define ourselves by what we value, rather than what we oppose, more effectively: we follow a “liberating spirit that transforms hearts and cultures for the betterment of His people.” Thirdly, the Gospel is good news, and we should be keen to share it.

In the afternoon, we received a talk from Professor Alec Ryrie about the recent history of Christianity. He discussed the Church’s loss of stature/moral authority in England, as the second world war (specifically the actions of the Nazis) created a new frame of cultural morality, based around the idea of Nazis as the ultimate evil, in contrast to the previous frame which placed Jesus as the ultimate good. He then went on to discuss what the church can learn from this (to recognise that some sins are far more awful than others), the problems arising from this new moral model, and what the Church may be able to contribute here. Christianity can give the world a sense of what is truly good, where the current dominant mode only teaches us what to hate; and Christianity has more to say about forgiveness and problems not caused by deliberate evil (both human and natural). Perhaps this is a form of hope for us: believing our faith still matters in the world, and that we can make a positive contribution as people of faith.

At other times throughout the weekend, we engaged in craftivism (activism through arts and crafts); we walked about the grounds with someone we didn’t know well, sharing reflections from the weekend and a period of silence; we shared in worship (led by Ruth, a friend from the Iona Community, with whom SCM recently began developing a partnership), including a communion on the Sunday morning; and we tried to build Bible stories to do with hope out of Lego. This time spent in companionship and learning with new people was an important part of the weekend, and brought me closer to everyone involved.

In his closing reflections, Augustine shared the following phrase from the Book of Common Prayer: it is our job to “call the Gospel afresh to each generation.” As Augustine interpreted it, this means we need to understand how the Gospel fits within our context, and live it out; where the Gospel calls for it, we have a right to be radical. This weekend, I think many of us were refreshed and energised to feel that calling anew.

If you would like to catch up with sessions from SCM's National Gathering then please visit our YouTube Channel here.