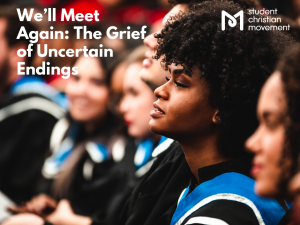 Many of us will have seen Legally Blonde, where the graduation ceremony is the happily-ever-after ending that closes the film. We are continually sold this idyllic promise that our time at university will end with a triumphant graduation ceremony; yet the reality is more complex than it initially seems – even in non-pandemic times. Yes, finishing university is a time of great celebration; it is also, in my opinion, a time of grieving. University is where people blossom both academically and socially, so it is natural that when it comes to an end we may be confused – and even fearful – about what the future holds.

The current pandemic compounds the natural grief that comes with the end of one’s degree. Students are not sitting exams in the way envisioned, and post-exam celebrations with friends (alongside summer balls) are a very distant dream. Various summer graduation ceremonies have been cancelled. Even more painfully, many final year students would have left campus for the Easter holidays, on the assumption that they would return for one last term and that they would be able to say goodbye to their friends in whatever way they saw fit. Also, they will not get a leaving service or blessing from their church community, or the chance to say goodbye to those who have been key in their Christian formation.

How might our faith help us to deal with the lack of closure that comes from not knowing if or when you might see your friends again, and the ensuing grief? As I write this, it is Eastertide: a period of reflecting on the final days of Jesus’ earthly life. Although Jesus had spoken of His death and hinted at His rising again pre-crucifixion, the disciples were clearly not sure of what might happen next. Such was their sense of grief and uncertainty following His crucifixion, that Mary Magdalene and the disciples walking to Emmaus didn’t recognise Jesus when He appeared to them. Equally, before Jesus ascended to Heaven, He promises His disciples that the Holy Spirit will come upon them. Although the disciples never see the actual Holy Spirit itself, after Pentecost they can trust that the Spirit is truly with them. Through these Biblical stories, we know that – just as Jesus is among us even though He is not physically present on Earth – that the love of our friends remains with us, even if we do not speak to them. Like the disciples, we carry our friends with us, even if we do not see them.

In these lockdown times, two old songs have remerged within British consciousness: the war-time song, ‘We’ll Meet Again’, and the Rodgers and Hammerstein number, ‘You’ll Never Walk Alone’. Listen to these songs, for their lyrics ring true. We know that even though we may never see some friends again that, as Christians, we never walk alone: the love of Christ remains with and sustains us, always.