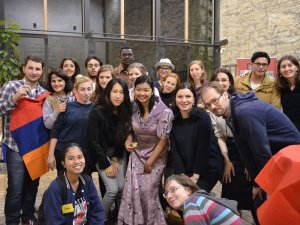 As a former international student, I’d say I’ve actually found my identity in Scotland. The first time I returned to the States, I went back a very different person. I think part of that is related to the American idea of finding your roots, which very few other countries have as part of their culture. But even without that, I think you always gain a better understanding of yourself when you’re an outsider. I have a background in anthropology, and one of the things I learned is that interacting with another culture as an outsider actually reveals a lot about yourself and your own perception. No matter where they’re coming from, every international student I’ve talked to has found something about Scottish culture that surprises them.

Language is obviously a huge factor when it comes to identity. Especially in Glasgow, the ability to understand the Scottish accent can be a massive problem. Even students who speak English fluently have largely been exposed to American or BBC English through media, and it’s hard to confront that while also navigating and respecting Scottish identity politics.

Can an international student community feel isolated? How do you engage people in the different cultures and communities of Glasgow and the rest of Britain?

Of course, any subgroup of humans is in danger of becoming insular. But if a community is truly international and diverse, chances are that someone in the group is going to have a tie to the wider community that they will want to pursue. Such a big part of it is intentionality. It’s very easy to hang out with people from your country, but there are always people who intentionally seek out friends who aren’t.

Here in Glasgow, specifically at Wellington, I think there’s a natural drive to branch out into the wider community because there are so many opportunities to engage and a culture in the city of talking to people. You might not form lasting relationships with the people you talk to on the street, but it still creates a sense of a larger community and a desire to connect. At the same time, it takes actively seeking people out and taking those initial steps.

What is the most rewarding aspect of working with international students?

I’ve made really good friends, and I’ve learned a lot! I’ve learned so much about how things that I take for granted are not universal, even in terms of how students behave, what they want, and what they look for in a community. I organize student coffee afternoons on Tuesdays and Thursdays, and for some people it’s the only time they leave their rooms during the week, which I didn’t expect at all when I started.

Sometimes I feel like my entire job is a learning process. Student communities are inherently ever-changing, and what works for one group or even for one semester isn’t necessarily going to work again. I’ve had to learn to be flexible and adapt.

From your experience doing outreach work, what do you think students—particularly Christian students—can do to engage more with international students and people from different backgrounds?

Ask questions. Always ask questions. People don’t always like to talk about themselves, but if you’re far from home, you want to talk about home. Being able to share that with someone is comforting. So be willing to admit your ignorance and ask questions, because it shows willingness on your part to meet them halfway. International students already feel so much pressure to know and understand British culture and the English language, so admitting that there’s stuff they know that you don’t know, and yielding expertise to them, can be so empowering.

Having Google Translate on your phone can also be really helpful. A lot of international students will already be using a translation app, but may be embarrassed to do so in front of you, so taking the initiative to overcome any communication barrier, acknowledging that it’s your problem too, is another good way of meeting someone halfway.

Finally, if you’re talking about religion with international students who may be unfamiliar with Christianity, try to keep the conversation basic without talking down to the person. Don’t get bogged down in theology, but don’t dumb things down either. Realize that a lot of students are coming from cultures where religion holds quite a different significance and may have shaped their experience in very different ways than it does in the West. Try to find reference points that person may recognize, answer any questions as best you can, and be honest about the aspects of your own faith that you don’t understand.

Read part one of our interview with Lizy here.

Tags:
International Student
< Back to all blogs