The What? and How? of Evangelism 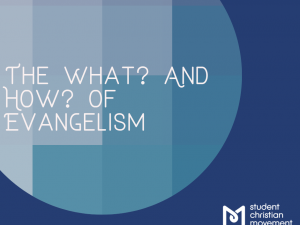 “Are you saved?” the street preacher asked, looking suspiciously at my glittery nails. After I said yes, we both looked at each other in awkward silence: he couldn’t believe the glitter-man was a Christian, and I couldn’t believe people still do the whole turn-or-burn on the streets. Whilst the whole encounter left me a bit uncomfortable, I think the reason evangelism is considered a taboo subject in certain circles is simply a matter of method (how) and content (what), rather than reluctance to commit to the great commission. These reflections were born out of countless conversations with my friend Roy Makin, a street evangelist in Colchester of blessed memory.

The kind of turn-or-burn scare tactics we've all heard countless times no longer work as they (maybe) used to. Worse still, they seem to put people off just as much as the judgemental "your-sin-is-worse-than-my-sin" attitude they usually accompany. I feel the Gospel is no good news at all if it’s just about sinners in the hands of an angry God (a la Jonathan Edwards) being saved from righteous wrath.

True, people don’t particularly believe in hell any more, but their souls are just as troubled by other things: uncertainty, violence, hopelessness, lack of meaning… What if the Gospel was more than a fantastic fire insurance; what if it was a balm for troubled souls? What if the Gospel could proclaim good news to the poor, liberty for the captives, fill the hungry with good things and guide our feet into the path of peace? What if proclaiming Jesus as Lord was more than a theological statement, but also once more a political one, a response to nationalism and imperialism, to the cult of death of exploitation of idolatrous economical systems? What if liberty from principalities and powers was about healing us from the hurt we pass onto one another, and freeing us from the shackles of a consumerist world-view where everything is disposable and profit-driven?

Imagine if the Church could bear witness to an upside-down countercultural Kingdom where the self-giving love of Christ, his obedience to God against all ridicule and threats, where not just a matter for sermons but a whole way of living! I dare say much more could be accomplished if only the Church dared to be an intentional community as it used to in its youth, when people were attracted by a different way of being in the world, rather than well-crafted apologetics and pamphlets.

The way we do evangelism has to change. Sadly the children of the Reformation have given so much importance to personal salvation and a personal relationship with God that we have often forgotten that the Church has always been, above all, a community. Extremely successful movements in Church History have highlighted the difference a community-centred approach makes.

Congregationalism was born from stubborn people choosing radical non-conformity, challenging the status quo of the State, and going onwards in discipleship relying on nothing more than each other and individual gifts. What started as a dispute over liturgy and finer points of theology helped shape Britain by inspiring John Stuart Mills and Harriet Taylor to write On Liberty, empowered modern liberalism from countless chapels, and made women’s ordination mainstream in British churches with Constance Coltman.

A little while earlier, Anabaptism spread like wildfire through continental Europe, on a programme of martyrdom, disobedience to the State, and refusal to bear arms. It proved itself pacifist but not passive in the last century by becoming renowned through relief efforts after both World Wars and countless natural disasters. From that tradition emerged great thinkers such as Yoder who in turn propelled Christian Pacifism back into mainstream theological thinking.

Simone Ramacci is a Congregational Federation Lay Pastor and Practical Theology student who also volunteers for the Anabaptist-Mennonite Network and the Fellowship of Reconciliation.

Tags:
evangelism
< Back to all blogs