What on earth is going on in the US and what can we do? 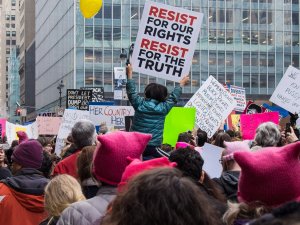 “When fascism comes to America, it will be wrapped in the flag and carrying a cross”

The above quote rings very true, especially now that Trump and his far-right cronies have taken over government. It is attributed to US novelist Sinclair Lewis, and captures the essence of his dystopian vision of America. In his 1935 novel, ‘It can’t happen here’, he wrote: "But he saw too that in America the struggle was befogged by the fact that the worst Fascists were they who disowned the word 'Fascism' and preached enslavement to Capitalism under the style of … American Liberty."

What's happening in the US?

Since Trump became President, he has acted as if he is an authoritarian dictator rather than a democratically elected leader. Over the weekend, having signed some horrible executive orders against minorities and vulnerable people, he decided to sign a new order which stressed the constitution to its limits and sent the whole world into uproar. His order banning Muslims from seven countries from entering the US has caused chaos, as many have been left stranded at airports- even those with green cards, families, houses and pets in the US.

It has been encouraging to watch the outrage from around the world: from the powerful statement put out by the African Union denouncing the American government for ‘taking many of our people as slaves’ but refusing to take them as refugees, to the mass protests in the US, UK and other countries. The new ‘leader of the free world’- Angela Merkel, the German chancellor- spoke out against the ban, saying it was “not justified to put people from a specific background or faith under general suspicion” and accusing the US of ignoring the Geneva Convention on refugees. Despite an unwritten rule that former presidents do not normally criticise current ones, Barack Obama also felt sufficiently concerned to issue a statement saying that American values are at stake, and even Prince Charles joined the criticism with a not-very-subtly-disguised rebuke against those who are forgetting the “lessons of the Holocaust”.

As heartening as all of this is, our own Prime Minister, Theresa May, not only rushed over to America, determined to be the first world leader to meet the new president, but was also pictured awkwardly holding hands with him. More importantly, she still refuses to condemn the Muslim ban or to cancel his State visit later in the year. We can only assume that she either doesn’t care or is so desperate for a post-Brexit trade deal that she doesn’t dare speak out. If so, this is a good reason to be very worried about a hard Brexit.

The most frightening thing for the United States and the world more generally is not the travel ban- as awful as it is- but the way that those in positions of power are behaving. The President has sacked experienced people from powerful positions and replaced them with people who will do his bidding, some of whom- like Steve Bannon- are openly white supremacist. Also, since the federal court issued a stay on the worst elements of the Muslim ban order, border agents have reportedly been ignoring the court order in favour of obeying the President. Added to this, one of Trump’s closest advisors has said that the court order “really doesn’t affect the executive order at all”. There are some who are already arguing for impeachment, based on the fact that the new government is ignoring the constitution and issuing "impulsive orders, un-vetted by legal, policy, or political staff".

What does our faith say?

We have a good example in Jesus and all sorts of Christians down the ages for bravely resisting injustice. As much as the new administration likes to say it is Christian, there is nothing Christian at all about persecuting minorities or not helping refugees. In fact, the entire Christian story is a refugee story, and helping refugees is a crucial part of our faith- as SCM member Adam Spiers explains here. Jesus continually questioned and opposed authority when it was unjust, from the turning over of the tables in the temple to the healing of a lame man on the Sabbath. For Jesus, people came first, and everyone was equally worthy of dignity, respect and love.

What can we do?

We, as Christians, need to stand up to the growing fascist tendencies of the Trump administration. Here are some ways we can do this, even from the UK:

It's important to remember that there is always something we can do to oppose and resist evil regimes. People like Donald Trump may think they hold all the power, but they can never take away the human desire for justice and compassion, and we will always fight back- by building community in all sorts of ways (see here for one way), through an independent and questioning press, through protest and non-violent resistance (see here for a great article on this), and through political and legal processes.