What is Ecumenism? What isn’t it? 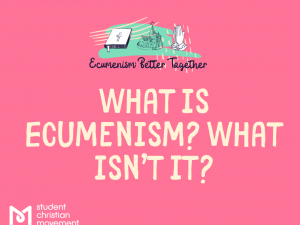 Let me first be clear by ruling out what ecumenism is not and should not be. Ecumenism is often wrongly caricatured as merely passively accepting everything other denominations say, think, do and believe without thought or question. However, to participate in the services or activities of another denomination and to converse and discuss with those from other Churches is not a one-dimensional, binary zero-sum game. To engage in ecumenism is not to compromise on your core principles, backslide, betray your values or become a relativist. Even if you are part of the small minority of Christians who believe that only those from your denomination are true Christians and are thus saved, reaching out to and engaging with those from outside your Church is surely key to meeting them where they are at and making the gospel you advocate relevant to them? There is still room to believe your denomination is overall and in net terms the most true and authentic without dismissing other denominations altogether. No, it is to immerse yourself in that which you would not otherwise encounter or experience. Ecumenism can feel a little like an out-of-body religious experience; we are venturing out into the unknown, the “Other”, walking the path less trodden and deciding to go the extra mile.

Ecumenism is to observe, capture and take in the unknown. God is, after all, at least partly, the unknown “Other”. As T.W. Hadley puts it in The Christian Faith of Søren Kierkegaard, ‘[T]he believer in this world … in great risk, and by a leap- faith takes mankind beyond all rational thought into a new world’. To do ecumenism is to gain an insight into the culture of another denomination, to see the great deal you have in common and to pinpoint that upon which you really do disagree and assess its importance. Often, through my own experience, I have realised that most of the differences solely or mainly concern tone, emphasis, terminology or worship style, rather than key differences of fundamental belief. To engage in ecumenism is to discover what it really means to be a Christian, what Christians have in common and what they share. To gain a greater and deeper insight into Christianity, its varied worship-styles, churchmanships and theologies. It allows us to comparatively assess that which we do well and that which we uniquely offer within our own home churches and denominations, but also to see that which other churches and denominations do better at and that which they uniquely offer. It also enables us to gain a greater understanding of our own denomination.

Does it come at a cost or a price? Personally, yes. It offends our sense of pride and arrogance that we and our denomination have all the answers and best approaches. However, as Kierkegaard noted in Training in Christianity, Jesus Christ Himself ‘is a sign of offence’. After all, it was Christ Himself who often rightly offended the pride of the Pharisees, Scribes and High Priests.

Written by Ben Somervell, an SCM Member at Durham University.