What I learn from my students 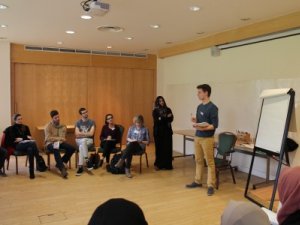 Sixteen years on from my own graduation I now have to admit that the students I minister to and teach at the LSE belong to a different generation. That was brought home to me when I started as chaplain here and I asked the president of the Islamic Society how it felt to be a Muslim in post-9/11 Britain. He replied that he had been ten years old on 9/11 so didn’t remember much of what life was like before! Now new students at LSE will have been four or five when this world changing event took place.

I was 21, freshly graduated from university with a degree in theology and religious studies. I thought I knew a lot about religion. But the attack on the World Trade Center and the events that followed radically shook up what I thought I had learned about faith in today’s world.

When I was ten years old, another world changing event took place. The Berlin Wall came down marking the end of the Cold War. One philosopher declared this moment the “End of History”. We were now living, it was argued, in an age when liberal democracy and human rights would replace the old ideological battles, including those of religion. So many of the assumptions I took to my studies of religion at university were that theology was concerned with otherworldly things, things that mattered to me because I was part of an odd shrinking minority who still had a religious faith. But ultimately of diminishing significance in the spheres of politics, society and even personal identity.

So what I learn from my students now is how to grow up conceiving of religion in a very different way. I see that in three attitudes. First, my students have a far greater respect for the cultural dimensions of religion. For my generation, religion was just beliefs you had in your head (or didn’t). But the increased prominence of non-Christian religions has reminded Western Europeans that religion has just as much to do with how you live your life in community. Students today understand that some people have dietary requirements relating to religion. Some have different festivals they need to observe at home or in their place of worship. And before these different practices are challenged or criticised, they are respected as part of a broader respect for cultural difference.

Second, when I was growing up there was a strong tendency to see religion and atheism as the two choices available. “Religion” was lumped together as something to approve of or condemn. Today, more young people (by no means all) are aware that there is a vast array of religious options. Some are life-giving, and some are lethal. Rather than seeing religious questions as black and white, we are learning to navigate the grey areas of good religion and bad religion.

Third, students today appear much more comfortable with public discourse about religion. It is part of the language of equality, the language of community cohesion, and, of course, the language of security. Students will still robustly disagree and argue over the veracity and role of religion, but at least they are used to doing that! The assumption that religion is not a polite topic of public conversation has gone. For all the conflict we are seeing about religion in today’s world, that’s still an encouraging lesson to learn from my students.

The Revd Dr James Walters, chaplain to the London School of Economics