When Will Black Lives Matter? 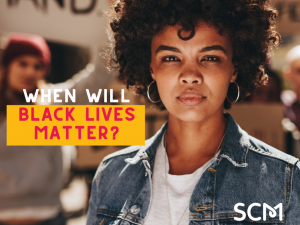 As a Black British woman, it has taken some time to gather my thoughts around the latest in a long list of (publicly known) murders of black people at the hands of American law enforcers; that being the murder of George Floyd, 46. This has come so soon after the murders of Breonna Taylor, 26, and Michael Lorenzo Dean, 28, and so many more before them, who should never have had to face such a violent, senseless and unjust end.

It should be without need of mention that these are not just names or numbers or statistics, but people. People with futures, with hopes and dreams, with ambitions, friends and families, and hobbies and interests, who were killed by the very people who had been given the authority to protect them.

My initial thoughts towards the sudden social media traction following the latest death, were of scepticism. I wondered how long the pledged support of allies would last: will the support continue once the initial uproar dies down; when it is less convenient to do so; when reputations are on the line? I also questioned what narrative the media would promote if the protests went wrong. Whose agenda benefits the most from this time, and will any lasting positive change come from this? All questions I have learnt, from experience, to consider regarding issues of race.

Having asked these questions, I was reminded to be present and grateful for the support that was there. In the present, many ethnicities were feeling something with us. Pledging to speak out against these injustices, to do more, to learn and to listen to the black community - and in this, there is hope.

“Carry each other’s burdens, and in this way, you will fulfil the law of Christ.” Galatians 6:2 NIV

The unjust murders, targeting, criminalisation and racism towards black people and people of colour is not a new issue, nor is it the first-time large numbers have raised their voices about it. The problem comes from the lack of follow through from people in positions of power to make real and significant change to the system of racism that has built our society. The prolonged disenfranchisement of black people across the world is also enabled by those who do nothing. Those who say nothing. Those who are witness to these tragedies, express temporary outrage, and proceed to go on with their daily lives, as the true criminals go free.

Our allies must do more than just be outraged at these incidences. They must question why these things are happening. Why are guilty white officers allowed to walk free? Why are black people criminalised in all forms of media and levels of society? Why is this still happening in the 21st Century? Our allies must educate themselves, diligently researching the truth behind these injustices and the ways in which they are complicit. If Christian allies could humble themselves to self-reflect and make positive changes which are informed by a growing understanding and compassion, and truly committing to doing their part in making the world a more loving, equal and just place, they would be acting out God’s will.

When we are born, we do not have a choice in our location, level of wealth, the family we are born into or the colour of our skin. These things are out of our control and yet greatly predetermine our lives; in the circumstance that you are born black in America, and other parts of the world, in the eyes of the law it can be a death sentence. This should not be. As Christians we are all the body of Christ, regardless of the colour of our skin or status of our birth, and God calls us into unity. Division is not the way of God.

“For all of you who were baptized into Christ have clothed yourselves with Christ.  There is neither Jew nor Gentile, neither slave nor free, nor is there male and female, for you are all one in Christ Jesus.  If you belong to Christ, then you are Abraham’s seed, and heirs according to the promise.” Galatians 3:27-29 NIV

We know that division can take shape in many ways, whether it is fuelled by racism, colourism, xenophobia, homophobia, transphobia, or sexism, to name a few. Divisions can also be more subtle. In our shared fight towards justice and equality, we all must support each other with a united voice when speaking out.

It can be easy to be led by emotions when we speak to others on these issues, manifesting in ways that cause people to feel discouraged to speak out again, and disregard the power they hold in doing so. If we find that others have unintentionally misspoken or misquoted information in our fight for justice and change, we should offer correction with discernment, grace and understanding. We are all learning together, we are all valuable and our message is stronger together.

“How is it then, brethren? Whenever you come together, each of you has a psalm, has a teaching, has a tongue, has a revelation, has an interpretation. Let all things be done for edification.” 1 Corinthians 14:26 NKJ

I was always taught to question everything, which has led me to seek truth. I encourage you to do the same.

As an individual I do not profess to have all, if any, of the answers. The answers are with God and so, first, I point you to our Heavenly Father. Though, I believe our Father uses people to be His hands and feet on the earth, and we all need to be representing His character correctly as so much damage in His name has already been done.

If we are to be His hands and feet, we must educate ourselves, have those difficult conversations about race to gain understanding and compassion, build relationships, and value the voices, culture and giftings of black people.

No one alone can solve such a complex and multileveled problem as racism, and as we are not just dealing with people, the problem of the human heart, or corrupt societal structures, but also with spiritual forces of evil.

Therefore, as always, we are called to pray, and recognise that we are also facing spiritual warfare, which requires a spiritual solution. By knowing our enemy, we can be better equipped to face his strategies such as; fear, division, deceit, attacking faith, exploiting lack of understanding, distorting and preventing an effective Gospel message and casting doubt on the goodness of our God.

Knowing this, however, should not cancel out the righteous anger towards racial injustice, which can drive a movement like we have been seeing around the world.

Finally, there needs to be action; tangible goals and outcomes such as political, educational and criminal justice reforms, justice for the many who have faced mistreatment at the hands of the police, funding, reparations and growth, before we can rest. I pray that this new wave of civil rights will bring about sustained positive change.

We are grateful that you are a good God.

That you are compassionate,

That you understand the struggles and troubles that we are seeing in this world.

Lord, we know that you are fully aware of and engaged in this situation.

Give us wisdom as we process what is going on around us.

Give us wisdom on how to understand, how we should act and what we should say.

Let us not be impulsive, but thoughtful in our discussions.

We pray that you would give us the confidence to speak in authority against spiritual evil.

We recognise that there are spiritual forces behind the wickedness and evil we see in our world, and we call it out for what it is.

We declare Jesus’ authority over the evil in the earth.

We pray, Father, that you would help us to be a united people, who represent Your Kingdom well.

People who bring Kingdom justice, Kingdom love and Kingdom generosity to everyone around us, and those who we do not know.

Saturate us with Your love, Lord.

Make us people of justice, people of prayer and people who represent You well.

Tags:
BLM
< Back to all blogs