Who is my neighbour? Tackling child hunger in the UK 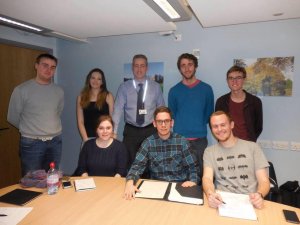 We live in one of the richest countries in the world; a country which has enough money to look after its population, and one which is nevertheless failing its most vulnerable people. Disabled people and people with long-term illnesses are having benefits taken off them cruelly and inhumanely, leading in some cases to destitution and death, while refugees and asylum seekers are locked up like criminals (otherwise known as Yarl’s Wood or Morton Hall detention centres) and expected to live on £37 a week; if they’re lucky enough to get anything at all, that is.

On top of this, the most vulnerable people in our society- children- are now the recipients of over one third of the food parcels given out by Trussell Trust foodbanks and, of these, half are primary school children. The government is proud of its employment figures, which are going down (this actually hides a much darker picture of employment in the UK), but sometimes it seems that certain people within the ruling party are also proud of the fact that food bank use is going up and up. If food bank use is going up even while unemployment is going down, the logical conclusion is that work is not paying enough. And the Trussell Trust’s stats back this up: 25% of people and families using foodbanks state the reason as ‘low income’, and many of the people stating ‘benefit delays or ‘benefit sanctions’ as the reason for using them are receiving in-work benefits. How can a government in a rich country be proud of the fact that people who are working hard are not being paid enough or given enough work to be able to buy food for their families?

Despite the government’s inadequate response to this issue, and its constant refusal to accept that increased food bank use is in fact a problem, it's still good to see that there are many people who care enough about loving their neighbours to do something to help in a practical way. I’m proud, for example, that students are among those leading the way in tackling both food waste and hunger. At the University of Sussex, students have been working with Fareshare, the Chaplaincy and the Student Union to provide food to people who need it; and in Birmingham, three Christian denominational societies (Methodists, Anglicans and Catholics) have come together to pioneer a food waste scheme which sees unused sandwiches from cafes being repurposed for people in urgent need. These fantastic students should inspire all of us to do more to get involved with helping people in crisis.

As well as the practical actions of these university students, MPs and food poverty charities have come together to tackle the issue of hunger, and specifically child hunger. This summer, food banks nearly ran out of food because of the enormous demand from families who couldn’t cope without the free school meals which are provided in term time. The work of the End Hunger UK campaign (which SCM is supporting) and the All Party Parliamentary Group on Hunger, headed up by Frank Field MP, has led to a bill being presented before Parliament. The bill- called ‘The School Holidays (Meals and Activities) Bill’- received its first reading on the 5th September and has cross-party backing. Campaigners are very hopeful that this bill can be passed when it receives its second reading in January 2018, and if it is passed, it will make a real difference to many families.

The government still needs to tackle the issue of low pay and insecure work, of course. Neither food banks nor free school meals are the long-term solution to ongoing hunger and precarity. However, if the bill passes, meals and activities would be provided by the local authority rather than people having to depend on charity and the kindness of strangers, which can sometimes be quite precarious in itself (as was evident this summer when food banks nearly ran out of food!) The most important aspect to this whole issue is the moral aspect: all people -regardless of background or education levels- deserve to be given decent jobs with decent conditions and decent wages, and no-one in this country should be struggling to provide for their family, whether they are able to work or not.

Ruth Wilde is the Faith in Action Project Worker for SCM. SCM are running two campaigns this year: End Hunger UK and Loving the Earth. Get involved now!

You can email your MP and ask them to support the holiday hunger bill (if they have already signed up to support it, please acknowledge that in your letter or email to them).

Tags:
End Hunger UK
Poverty
< Back to all blogs