Why Christians Should Be Involved In Politics 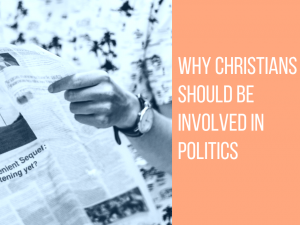 As Christians we have a duty to try and build God’s kingdom here on earth, whether it be by acting differently to our peers, providing for those less fortunate, or random acts of kindness. One expression of this is by actively getting involved in politics. What I learned by working with Local Councillors and MPs who were Christians, is that living your faith out can also be done through championing a particular issue (such as climate change), joining and campaigning for the political party that fits your base philosophy (traditionalist/socialism/liberal/environmental), or even standing for election yourself.

Politics is often perceived to be a murky and corrupt business. However, after working on political campaigns for several years, I found that this image is largely untrue, and that most people are involved in politics because they want to change the world for the better (according to whatever perspective they were coming from). There are some who have let hate take over and have used that hate as a vehicle to further their own ambitions, but these are, fortunately, in the minority. The truth is that most politicians are endeavouring to do good, but are as broken as the rest of us.

If you think about it we live in a broken world, with broken people trying to do their best in a broken political system. It may all sound a bit bleak, but I believe that as Christians we bring a unique toolkit to help repair it and to combat the hate. Our worldview is one of hope where there is despair; humility in the face of egotism, and faith that tomorrow can be better than today.

In times such as now, where politics has become so divisive and where the angry rhetoric by some politicians and supporters dehumanises the other side, we as Christians have the unique opportunity to bridge the divides in society and see the human behind the hate. John Wesley displayed these qualities that Christians can bring to politics when he said in October 1774: “I met those of our society who had votes in the ensuing election, and advised them; 1. To vote, without fee or reward, for the person they judged most worthy; 2. To speak no evil of the person they voted against, and; 3. To take care their spirits were not sharpened against those that voted on the other side.”

So be encouraged. The world seems to have gone awry in recent times with President Trump in the White House and with a looming Brexit negotiation cliff edge ahead – but all of these situations we face can be helped by Christians working within politics to bring hope in each other as human beings, seeing the image of God in one another, seeking a more humble approach to political discourse, and faith that we can work together to build a better future.

Stephen worked on political campaigns for the Liberal Democrats on and off between 2010-15, after completing his degree in Peace Studies. His wife Claire is currently the Minister at Fetter Lane Moravian Church in London.