Why Wear a White Poppy? 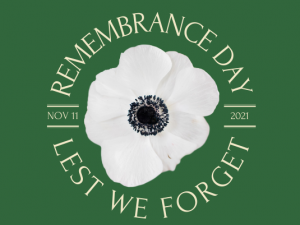 This Thursday, like every other 11th November since 1919, people across the country will meet the eleventh hour of the eleventh day of the eleventh month with a two-minute silence, marking the time at which the guns ceased firing on the Western Front during World War One. As a further mark of respect, millions of people across the UK will buy and wear a poppy. While the vast majority of these will be the traditional red poppy, some will choose to wear a white poppy instead.

Although often regarded as a relatively new symbol of remembrance, the white poppy has existed since 1933. It was originally produced by the Co-operative Women’s Guild, whose members included women who’d lost loved ones during World War One. The Guild were concerned that the message of ‘never again’ was being forgotten, with remembrance events becoming more militarised and the red poppy no longer being seen as a symbol that represented the need to work for peace.

Today the white poppy is distributed by the Peace Pledge Union (PPU) as a symbol of remembrance for all those who are a victim of war. Much like the red poppy, the white poppy is used to remember members of the British Armed Forces who have been killed or injured in active combat. However, unlike the red poppy produced by the Royal British Legion, it goes beyond this, being a mark of remembrance for all those whose lives have been scarred by war – regardless of their country of origin. As PPU themselves explain ‘suffering does not stop at national borders, and nor should remembrance’[i].

White poppies thereby challenge us not to be selective when remembering the victims of war. Every year millions of people’s lives are irrevocably changed by conflict. Across the world soldiers and civilians alike are killed or injured due to the weapons of war; people are left grief stricken at the loss of loved ones; homes, businesses and schools are destroyed; and millions of people are displaced. Each person who suffers in this way deserves to be remembered.

Besides being a symbol of remembrance, white poppies also represent a commitment to peace and a rejection of the glamorisation of conflict. Every year, members of the UK government participate in a Service of Remembrance at the Cenotaph, where the words ‘we will remember them’ are spoken as an earnest promise to actively seek peace. While services of remembrance play a significant role, it is important that we do not overlook the hypocrisy complicit within this. If we truly wish to seek peace, then we should not and cannot ignore how the UK actively supports and sustains conflicts across the world, with our government profiting from an arms trade that has supplied human right abusers with £17bn worth of weapons.

These are just some of the reasons why people choose to wear a white poppy, and why we encourage you to do so this year. After all, what good comes from remembrance, if we do not remember all those whose lives are damaged by war, or if we continue to support a system that ensures conflicts continue? As PPU explain, ‘the best way to respect the victims of war is to work to prevent war in the present and future. We need to tackle the underlying causes of warfare, such as poverty, inequality and competition over resources. A temporary absence of violence is not enough. Peace is much deeper and broader than that, requiring major social changes to allow us to live more co-operatively’[ii].

To find out where you can buy a white poppy locally please click here.

To find out how to make a white poppy wreath click here.

To find out where you can attend an alternative remembrance event click here.