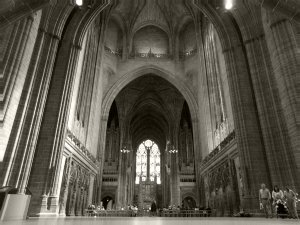 It’s not news to anyone that over the past decade, the church has been continuing to struggle with decline. It is, however, news to most people that in contrast to that, Cathedrals have grown on average by around 35% over the same period. So what is it about Cathedrals that have helped them grow? What can Cathedrals offer to students beyond a visit during Christmas or Easter?

Cathedrals aren’t quite like anything else in the Church, and Liverpool Cathedral isn’t quite like most Cathedrals. Being a place of worship, as well as a venue for events, a community seeking justice, a part of the civic life of the city – all whilst maintaining that all important number one spot on TripAdvisor – means there are countless avenues through which this Cathedral can grow. We’re seeing growth from the expected traditional and family worship, to the less expected Persian speaking community and contemporary light festivals. With such a range of things happening it is impossible to pin down a single reason for growth, instead there are a number of factors at play.

Cathedrals have always had a significant role in cities and are seen as something which belongs to the city. As I’ve spoken to people in Liverpool, people have referred to the Cathedral as ‘our Cathedral’, and that culture brings so many opportunities. In a time when people are often sceptical at best, and furious at worst with the church, we are often still seen as somewhere safe and respectable.

With that comes the opportunity for people to come here with a degree of anonymity, knowing that they can dip their toe without being sucked into the rapids. However, it’s not enough to simply be a place where people come, but always remain on the fringe. Jesus often challenged people to such an extent that many would walk away. In response to that challenge, the Cathedral throws itself headlong into supporting and discipling people who come and then go out into the community to be a blessing outside of our walls.

A Home For Students

As a student, it can often feel like you live in a village within a city. Wherever you go, everyone seems to be related by this big thing called the University and it seems impossible to meet any ‘real’ people.

When I was a student I would never in a million years have considered worshiping at and serving with the Cathedral. I thought that it would be stuffy and boring and that none of the ‘good stuff’ that I wanted to do would be happening there.

As it happens I’ve now found myself working for one because of the wealth of opportunity here. As an Evangelist I want to see more people knowing Jesus and consequently more of his kingdom in the world. Part of that vision in the cities across this country are these big crazy things called Cathedrals. I’m convinced that if students are brave enough to think outside the box and serve with them, we’ll see many more people meeting Jesus and his church, and more of his kingdom here as it is in heaven.

Tags:
University
Worship
Churches
< Back to all blogs